because I have the day off and you don't

♣ Today's post is probably slightly later than usual because I took a day of leave (which means I only have 256 hours, or 32 full days left, OH NO) following an evening of sheepish debauchery. Actually, I had planned on taking leave, but worked so many extra hours at the beginning of the week that I get the day for free! That's economic.

♣ Last night was Lamb Night 2007. A few folks came over for dinner and I slaughtered one of the sheep that lives on the common ground behind my house. I cooked my signature tomato lamb garnished with rosemary, and a side of instant mashed potatoes. It shear was great. My freezer was full of stale-tasting ice from the last barbeque, so I dumped it in the sink, then I pulled wool over my ice to make it melt faster.

♣ The newspapers are filled with stories about the icebergs in Greenland which are melting much faster than expected which means that Florida only has a few years left before it's 50 square miles and invaded by Georgia for annexation. I'm not sure who would win in a fight, an army of farm boys or an army of Cubans. Either group could probably kick Alabama's ass though, despite its little finger-shaped connection to the Gulf of Mexico. 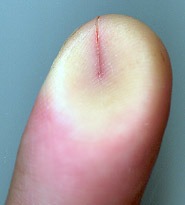 ♣ My finger is healing very nicely following the chocolate fountain (of blood) incident in the bathtub last weekend. It looked a lot grosser than this on the first couple days, but this isn't one of those Internet Gore sites. This, however, is

♣ There are way too many Presidential candidates at the moment, and I bet even more are running as I type this. They should hogtie a random 50% of the candidates and mail them to Norway, since most of them have the same chance to win an election that Harry Potter 7 has to get released without someone leaking the ending.

♣ Speaking of Harry Potter, Ella told me that she either wanted to be a wizard or the conductor of the National Symphony Orchestra when she grows up. I told her to pick magic over music, because the Arts will be dead within the decade, but there's a chance that someone will learn how to cast spells by the time she grows up. You can decide which she'd be better at by playing music behind this animated picture, or by shouting out LIGHTNING BOLT! like she's casting a spell

♣ My weekend is pretty packed. You can tell I'm a social butterfly because I got three e-vites. If you've never received an e-vite, it's an online party invitation with a complete list of guests and their RSVP notices. The proper etiquette is to view it every day to see who's replied, but not to reply until the day before the party when you are sure that you like everyone else who's going.

♣ Jack Bristow: It must've been lost in the mail.
Sydney Bristow: Your invitation?
Jack Bristow: Unless it was an e-vite. I don't read e-vites.

♣ Tonight, I'm going out to the Starbucks at Bailey's Crossroad to hear a free Rebecca Berlin performance, the hometown singer I plugged back in February

. On Saturday, I plan on stopping by work for a bit to check on some long-running processes (which are also still running as I type this) before some lunch plans. In the evening, I'm going to Jack's "Creepy CIA Torture House" to celebrate Kristy's graduation from business school. Sunday is bathroom-work day, followed by the Baptism of Eleanor Potter of Hogwarts in the afternoon.

Rob Lowe gets a birdie

Minister ticketed for wrath against speeders