an effective tool for keeping yourself physically strong, mentally awake, and morally straight 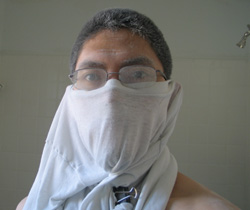 ♣ I spent Wednesday evening holed up in the under-construction bathroom. I was either busy sanding down the spackled walls for painting (and, in the process, inhaling fourteen cubic tons of spackle dust so I can sneeze out a lifesize figurine of Scooby Doo in about three days) or composing a video ransom message from my terrorist cell. I have the bomb made. Have you cleaned your sniper rifle yet?

♣ Several years ago when I used to play first-person-shooter games, I was always the annoying guy holed up with the sniper rifle, picking people off from afar -- especially on that UT2004 capture the flag map with two tall buildings and a long narrow path between them. CAMP. 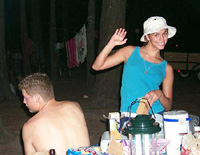 ♣ I'm also in the process of researching mountain bikes, because I've decided it's ridiculous that I've lived a mile from the WO&D trail for three years and haven't ridden on it. I also realize that it's W&OD, but that really doesn't have the same flow, so I have officially changed its name.

♣ The other day when I was driving down the Toll Road, I saw a biker of the motor variety on one of those hogs where the handlebars are incredibly high compared to the seat. Normally this would have evoked macishmo, but since he was only about five feet tall, it just looked like he was hanging on for dear life.

♣ My pet peeve of the moment is sites that have introductions -- I don't care that you licensed twenty seconds of the Rolling Stones and have concentric circles of primary color flying around in a Flash applet. I have yet to go to a site where I didn't click the SKIP INTRO button immediately. Intro'd sites are one place behind sites that automatically play music or sound when you load them -- I'll admit that my own site used to do that, but that was in 1997 when it was artistic, not annoying, of course. 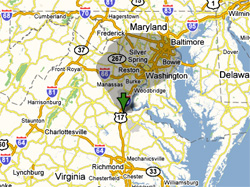 ♣ This weekend, I have a day trip planned to Fredericksburg, the quaint city which was recently labelled as the new southern boundary for the "Washington Metropolitan Area". With D.C. oozing across the map like a political stain of yuppies and SUVs, it won't be long until our region stretches as far south as Williamsburg. It will be nice to be able to enter any subway station and ride the Magenta Line to Busch Gardens, where Phil can make some phone calls and get us in for free -- but that's at least four years away, given the slow rate at which we build subways.

♣ Tomorrow is Kerry Sugrue's birthday, and Sunday is Goatzilla's birthday. Happy Birthday! Have a great weekend!

Women want to marry their dad

Man attacked by a swordfish snout

Letters from an Arsonist