♣ As you can see from yesterday's pictures, I had a small intimate barbeque last weekend, where I baked my popular cookies, made my secret onion dip, and cooked fourteen giant kosher hot dogs and twelve not-as-kosher hamburgers.

♣ I also bought two cases of beer for the barbeque (Costco had a sale -- $24 for 24 Coronas) and somehow, the nine drinkers managed to consume forty-five bottles by the time the night had ended. All of this alcohol apparently had the side effect of tilting the poker game in my favour.

♣ As previously mentioned, I finally won a poker game with nine other players and walked away with $60 in my pocket -- that's SIX times more than I started with! Tallying up my net poker winnings now puts me at around negative sixty dollars.

♣ Speaking of sixes, I rewatched the series finale of Six Feet Under on YouTube

and found it just as moving as before. If you don't plan on watching the series, and don't mind the ending being spoiled, give it a watch -- I think that the montage is so structurally sound that it's effective even if you don't know the characters. I especially like the constantly rising camera angles in all of the flashes which I didn't notice on the first viewing.

♣ Speaking of flashes, I liked the LOST season finale last week -- there weren't a lot of answers but it still managed to be an exciting closure episode. None of the "Locke staring down a hole" garbage from Season One. I just hope the fourth season picks up immediately on the island, and not somewhere else.

♣ I know it's a little late to be talking about a show that aired over a week ago, but LOST is well-known for its flashbacks, and the only other viable segue would have been "Speaking of things that are constantly rising...".

♣ I guess I could have talked about bread, like the Ziploc bag of Amish Friendship Bread mix Anna dropped off which comes with a very specific list of instructions to be followed over the course of ten days. I have a hard time remembering to do things daily, so hopefully I haven't already utterly obliterated the friendship of the Amish by ruining their loafty tradition. I guess I just wasn't bready to be a baker.

♣ Bread mix notwithstanding, I have actually been fairly productive all week long. Besides the usual daily tasks of cleaning litter boxes and cutting and pasting text from other sites to post as my own, I've played my trumpet some, continued work on the Paravia Wiki, and used the stationary bike for 15 minutes a day. That's not a lot, but too much exercise and I would look anorexic, like an Asian Nicole Richie. 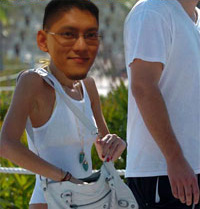 ♣ In addition to intellectual plagiarism, I also reuse old pictures and hope that no one remembers seeing them before. I'm guessing that my site readers have a very limited memory period and anything far in the past is fair game to reintroduce as new content. On Monday, I'll probably talk about going to Fugue class.

♣ Before we get to Monday though, we have to get through the weekend. This weekend will involve another online course for work, a little grocery shopping, and some Vintage Virginia Wine Festival time. Sunday is blocked off for the cornerstone-laying ceremony of my other bathroom (They call it the master bathroom, but it's even smaller than the hall version).

♣ Over the month of June, my dad and I will transform this bathroom into a near exact replica of the electric blue beauty you have already seen here. In July, I'll be installing some hydraulic presses that will randomly swap the two bathrooms while people are inside, so they never know for sure where they are pooping.

When not to use your pick up lines

EW on the LOST Finale