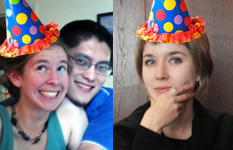 ♣ The end of June has quite a few overlapping birthdays which means that a lot of parents were "doin' the dirty" at the end of September. On the birthday menu today are Rebecca and Brianne -- happy birthday! For a gift, they each get a fake party hat Photoshopped onto their stolen pictures. 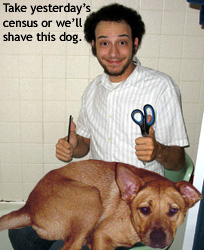 ♣ Photoshopping stolen pictures is the best. If I don't get 100% participation in yesterday's census, Chompy is going to be completely shaved, greased up, and pushed down a Slip N' Slide.

♣ I never owned a Slip N' Slide when I was a kid, since we did the more traditional (read: cheaper) "jump through the sprinkler while Dad waters the grass" entertainment available. Then again, water sports were never my favourite -- I was the guy on the Roman Rapids ride who tried to switch seats to avoid waterfalls. I hated walking around in wet clothes -- it really put a damper on my theme park enjoyment.

♣ I haven't been to a theme park since we all took a trip to Cedar Point in 2003. I always liked Busch Gardens more than King's Dominion, and not just because Phil reads this site -- it felt less trashy and least-common-denominator even if it had fewer rides. Plus, I always liked the show with the magician and the cauldron in Britain.

♣ One rule of thumb for boys in theme parks is that no matter how cool the rides are, they will always be drawn to the video arcade. It doesn't matter if the games cost four dollars and are exactly the same as the arcade back home -- they will want to play at least once before they leave. 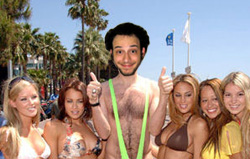 ♣ As a kid, I went on a weeklong RV camping trip with James and his parents and brought along my Super Nintendo. We spent a good three of the days playing Zelda until his step-mom got pissed off and kicked us out of the RV to experience nature. The picture on the right has nothing to do with this fragment, but Photoshop is Phun.

♣ It wasn't the cool kind of RV that you could ride in though -- it was a collapsible trailer that hitched onto the back of a truck which meant that we spent most of the trip cramped in the mini-cab seats littered with empty beer cans. (They don't teach kids that this is a warning sign until at least the ninth grade so we were oblivious to drinking and driving, but thankfully he didn't drink on this trip).

♣ The weekend is, once again, pretty booked up. This evening will include festivities for Rebecca's birthday in Arlington at another Mexican restaurant (we ate at one last night too, for Chris' birthday). Tomorrow, Jack and Kristy are getting married at Holy Trinity in DC followed by a reception at a country club in Great Falls. It will probably be pretty high class since you aren't even allowed to drive into Great Falls unless your median income exceeds a certain level. I'm hoping for an open shrimp bar like the one at Phil's wedding. On Sunday, my Dad and I will be finishing off work in the bathroom. Sunday is also Nikki (Giraldi) Homoroc's birthday. Happy Birthday!

Men look at faces in sexy pictures, except when the news story doesn't show the face