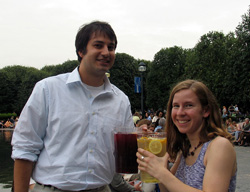 Friday the 15th: I had last Friday off from work, and spent the morning getting Anna to set up a Facebook account. I also turned her baby into an animatronic prop so everyone can feel like they're on the It's a Small World ride whenever Anna posts in the Comments section. In the afternoon, I took the Metro into D.C. to meet Rebecca after work for the Jazz in the Garden series that occurs every Friday night at the National Gallery of Art Sculpture Garden. 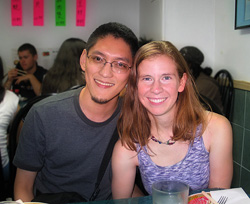 I didn't actually take any pictures of any sculptures, since pictures of random people you don't know are far more voyeuristically interesting than misshapen metal chunks, but you can presume that my manly chiselled features were indicative of the types of sculpted work one might see at such a Garden. We ordered two pitchers of sangria, both white and red, sat on a blanket, and listened to an avant-garde soprano saxophonist play incomprehensible duets with a tenor. 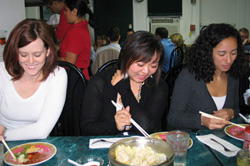 Jazz makes people hungry, as evidenced by the Great New Orleans Famine of 1929, and rather than order a tiny pizza for $6 in the Garden we decided to go to a real restaurant. After an aborted foray into some Indian place where we had them set up a table for ten, used their facilities, and then left because it was too expensive, we ended up at the Chinatown Express, located (surprisingly) in Chinatown. They had some excellent shrimp lo mein there which I ate with a fork, since chopsticks are not my forte unless a piano is involved. After dinner, we split off into groups of "young, not tired, going to a club" and "old and tired, possibly with plans on Saturday", with the protagonist of this story being in the latter group. We made it back to the West Falls Church Metro stop where Rebecca promptly lost her wallet, and after a quick but failed search in the darkness, I drove home to Sterling around 1 AM. 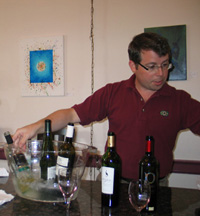 Saturday the 16th: After waking up a scant five hours later, I stocked Booty up on food and margarita mix, and drove back to Falls Church where I used my super-sleuthing abilities (learned from reading Mystery Sneakers in third grade) to find the missing wallet inside the car. With gas money in hand, we drove down to Fredericksburg -- rather, I was chauffeured to Fredericksburg thanks to my lame "I can't drive a manual" excuse -- to visit some childhood friends of Rebecca who were graduating from various milestones of life like high school and college. 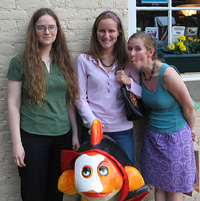 Following an all-morning brunch with millions of cousins and grandkids and at least eight cats (one of which decided to groom grandma), we went into Old Town Fredericksburg for soft-serve at Carl's and a trip to Edwin's wine shop, Virginia Wine Experience. Although Edwin was at the beach this weekend, we still slipped into a Tasting, sampled a bunch of wine and left with a bottle of Riesling, shoplifted in my Fake-Stomach-Rolls compartment.

From Old Town, we returned to Rebecca's friends' parents' home, but the parents had gone to a wedding, and since none of the related folks in our gang actually lived there anymore, no one had a key. To remedy this situation, I broke in through a low second-floor window and saved the day, showing that crime does sometimes pay. 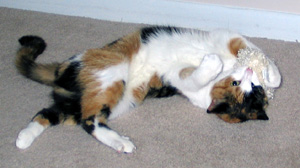 Sunday the 17th: A Super Big Two-Dwo at Friendly's for a late breakfast was followed by a trip to Petsmart to see the new kittens. Being a yuppy cat owner, I also picked up a new toy for Amber, since all of her other toys are worn hand-me-downs that smell like Booty. It looks like a Loofa in the picture, but it's actually a fuzzy sheep that can be filled up with bags of catnip. Amber played with it nonstop for about twenty minutes, doing her patented "Dave McGarry Backhand" to throw the toy down the hall and then chasing it. The rest of the day was dedicated to hardcore relaxing.