Relatives of the Virginia Tech massacre victims said yesterday that they had not been granted representation on the panel investigating the killings and described themselves as "both angry and disappointed."

At the risk of sounding unsympathetic, I'd say that the relatives of victims in the shooting have about as much of a right to be on the investigation committee as I have to call myself a professional basketball player (although this might be a bad analogy since I was on the music theory basketball team that had an unbroken 16 game streak). The purpose of the panel is to examine the incident from an unbiased perspective and determine if anything can be done to prevent future incidents. I'd guess that the most effective panel would be made up of experts -- experts on gun transactions, mental health, and police / emergency responses.

Unless one of those relatives is an expert in a pertinent field, they have no right or privilege to be on the panel, and would be of no use in helping it reach any conclusions. They can read the published findings with the rest of us non-panelists -- on the aisle display at Costco.

Lambasting is fun though -- especially with tomato sauce. 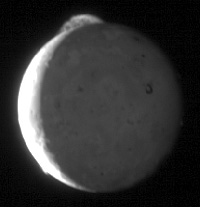 This five-frame sequence of New Horizons images captures the giant plume from Io's Tvashtar volcano. Snapped by the probe's Long Range Reconnaissance Imager (LORRI) as the spacecraft flew past Jupiter earlier this year, this first-ever "movie" of an Io plume clearly shows motion in the cloud of volcanic debris, which extends 330 kilometers (200 miles) above the moon's surface.

In related news, accusations began to fly almost immediately on Capitol Hill over which administration officials leaked information about the plume to the press and whether Scooter Libby was involved.

As ancient readers can attest, I'm not a big fan of spending money for space exploration

. Pictures from space like this one are neat, but are they really a billion dollars worth of neatness? Is seeing a distant planet barf into space going to teach us something about survival on our own planet? If we really want to get something useful out of space exploration, we should find a way to blast Maryland (and maybe Delaware) into orbit.

Captchas are too hard