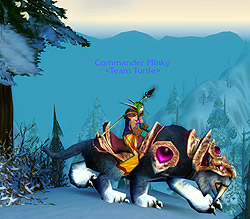 After five or six months of regular playtime, Plinky finally reached Rank 11 on the Lightning's Blade server, which puts my character in the Top 30 players on the server, makes it the only non-level-60 character in the Top 500, and the only non-level-60 with the special armored tiger pictured to the left against the scenic backdrop of Dun Morogh. I've now done everything worth doing in the game (and no one who doesn't play the game cares why I think raiding is a big waste of time). You have to hand it to Blizzard for consistently cranking out top quality addictive games -- I've yet to play a Blizzard game I didn't like, and World of Warcraft has managed to snare millions of players willing to pay $15 a month for a virtual world where they can do whatever they want.

In recognition of games that you can play forever without losing that sense of fun, here are the top ten games that I played the most in the past twenty-six years (not necessarily the greatest works of art!).

10) Quest for Glory I:
Originally named Hero's Quest, until Milton Bradley sued Sierra On-Line because they were releasing a board game of the same name, this was Sierra's first departure from regular adventure games to role-playing adventure games with stats and classes. You could play as a warrior, rogue, or mage, and I always chose warrior. I used to run around fighting monsters for hours on end just to get 100 in all categories. This game was addictive all the way through IV, which was too buggy to complete and killed my interest.

9) Ultima VI:
This was a top-view role-playing game from around 1991 which I played for years, even after its sequels came out. The entire world was alive, and every character in the game had its own schedule which it followed, sleeping at night and going to work during the day. If you got tired of the story, you could do useless tasks like bake bread, and every action from growing the wheat to putting the dough in the oven was possible in the virtual world. 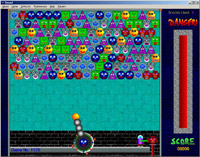 8) Snood: I wasted so much time in grad school on this puzzle game -- and it was the number one reason why I didn't compose as much as I should have during my two years in Florida. It's still on my desktop, but I'm no longer addicted to it. 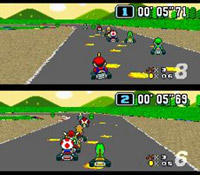 7) Super Mario Kart: I'm talking about the original Super Nintendo version -- all later versions are pale replicas. This game had the perfect blend of single-player and multi-player, and I used to be a pro, though I could never finish the Trophy Circuit with Rainbow Road at the hardest setting. I could fling a mean Green Shell though!

6) Starcraft: The "original" real-time strategy game where you farmed resources, built buildings and armies, and defeated the enemy. I played the single-player campaigns ad nauseum, and then went online to play the multiplayer aspect, proving to the world that I sucked at these types of games. I could beat any takers on the map, Space Madness because I had a perfect Scout rush, but died pretty quickly to any experienced players. Once that got boring, I spent hours playing with Philip against computers on the Insane difficulty level, or writing battle reports for www.battlereports.com which were quite popular in their heyday. I also got Kelley addicted when he was my roommate, and probably lowered his QCA that semester by a couple points (the booze, drugs, and skirt-chasing did the rest).

5) The Incredible Machine:
This was the perfect game for me -- a puzzle game where you were given an oddball collection of parts, like fans and pulleys and goldfish bowls, and told to accomplish some strange goal, like "Save the mouse from Kitty the Cat" in a Rube Goldberg way. I spent months playing and replaying the game and its sequels, and then spent more months creating my own puzzles for my friends, who could never solve them. 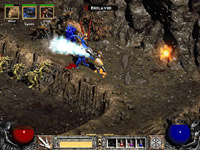 4) Diablo II:
This game and I have a strange relationship. Every couple years, I'll remember how fun it was and reinstall it, not realizing that it's just mindless addicting fun with no end in sight. I'll play it for a couple months until I realize how utterly useless the game is and then I'll uninstall it. The amount of time I invested in the game to the amount of "stuff I had to show for it" is ridiculously low, yet it was still addicting enough to keep on playing! 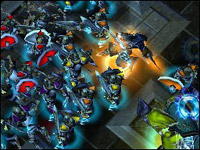 3) Warcraft III:
This game on its own was decent but not particularly great, but it was really responsible for all the lore and storyline that went into World of Warcraft. Even though I grew tired of the game very quickly, it came with a map editor which extended its life on my computer by a good two years or more. I got involved in map making and later helped on the custom map, Footmen Frenzy, which became a worldwide craze, and my own maps

which saw critical success but died at the box office (because they required too much thinking and most people are dumb -- not that I'm bitter). And if you think a Warcraft custom map can't spawn a worldwide craze, then you obviously haven't seen this music video by some Swedish pop star talking about another Warcraft map, DotA

. I find it amusing how many token Swedish blondes find playing DotA sexy.

2) World of Warcraft:
I've been playing this game for a year and a half now, and it's still as enticing to play as it was before. I feel like it has about a year left of shelf life before I cancel my account, but until then, this satisfies all of my gaming needs and saves money that I would normally spend on games that I'd play for a month and abandon. 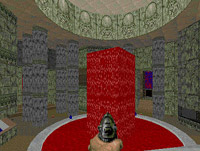 1) Doom II:
I played this game for my entire high school career -- it and all of its prequels and sequels. I could probably load up the game right now and run through most of the levels from memory, even on the hardest setting, and I was addicted like nobody's business. Once I ran out of levels, I made my own, and played them for hours over the phone lines at home (which my teenage sister no doubt hated).

What games have you played the most? (See what I did there? I turned today's update into a question, inspiring you to post something in the Comments section).

Revenge on the Stingrays