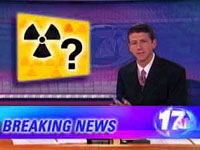 The human race has a morbid curiousity with the misfortune of others, manifested in the way we rubberneck at accidents on the interstate or check the evening news for an increase in violent crimes and embarassing misdemeanors. My personal form of this guilty pleasure is to read the advice columns in the newspaper, because it's always comforting to know that there are people more clueless and socially inept than anyone I've ever known. Just yesterday, the following letter appeared:

I met a man on the Internet one year ago. We have been exchanging e-mails three times a week. He doesn't like to talk on the phone. He has told me time and time again that he loves me and wants to marry me. We have met only five times because we live in different states. It bothers me that all these times we have met I always pay for my airfare and hotel room. He has never introduced me to his parents or any member of his family. I have asked him to come to visit me, so that I can introduce him to my parents and other members of my family, but every time he seems to have an urgent issue that needs to be attended to.

He has borrowed $6,000 from me, which he promised to repay, but so far he has not. Whenever I ask him about the money and what he thinks about us, he replies, "I love you." I love him so much, but I have a feeling that he does not love me. What should I do?

Having served many a time as the emotional escrow holder between two dating friends, friends needing confidence building, or friends in the unrequited throes of love and lust, there's only one universal lesson I've come away with: when people ask for advice about a situation that seems (to the outside observer) ridiculously obvious, hopeless, and/or unhealthy, they want to hear advice that affirms the path they've already chosen rather than learn of a more difficult path that might save them some heartache.

It amazes me how many letters like the one above are penned to professional advice columnists every day when the answer plainly lies in a two tick multiple-choice test with A) Ditch the bitch or B) Castrate the bastard (depending on the gender of the offending party). No matter who is asked, the unhappy person will probably get a reasonably similar response, yet he or she always feel compelled to shop around for second and third opinions. This must be why advice columns and self-help books are such a lucrative trade.

Once I've become sufficiently disillusioned with the human race, I brighten my mood by turning the page to Hints from Heloise, because I never would have realized that a rock from my garden could help prop a door open without that letter from Peggy in San Antonio, TX. Thanks, Peggy!

Arwen not featured in X-rated Tolkien