more regular than a mule on Metamucil

♣ If you missed the comments section from Tuesday, you can see pictures from Kelley and Kathy's Hawaii Beach Wedding Extravaganza featuring first-runner-up from the Bob Barker look alike contest here 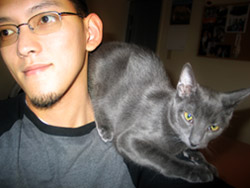 ♣ Another Kathy has been at another beach this week enjoying the remnants of Hurricane Ernesto, so I've had two hyperactive kittens running circles around my house this week. I've refrained from posting pictures since I went overboard with cat pictures last week, but here's just one so Kathy will stop bugging me. Lake likes to sit on my shoulder while I play Warcraft. 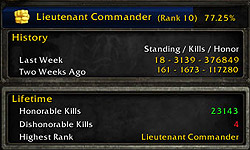 ♣ The necessary evil of the World of Warcraft honor grind continues, and next Tuesday I'll go from Rank 10: Lieutenant Commander to Rank 11: Commander, effectively outranking every non level-60 player on the server (and also reader Brianne's self-appointed title). The amount of effort it takes to reach this rank really isn't monumental -- the big issue is that your rank decays 20% every week, so you really have to do all the advancement over a very short period of time to really get anywhere. This type of system rewards the unemployed kids in their parents' basement and the slacker-assed twenty-year-old business majors, of which I am neither, so I'll stop after Tuesday instead of trying to go farther. It does get me bragging rights and a really fast BLACK WAR TIGER (with a PUFFIN BAY GREY saddle) to ride around looking important on

♣ I'm sure a lot of readers don't give a hoot and/or a holler about my Warcraft progress, although I know of at least four of you play or have played the game in the past. Think of them as self-indulgent lookatme's, much like whenever Mike talks about his Alexadex progress

♣ I would never do good at games that require me to spend fake money, because I would either want to win with some ridiculous oddball strategy like buying all the stocks that begin with the letter Q, or I would blow all the fake money since I know it's not real. This is also why poker games with no buy-in never work. Someone's always all-in, and that someone's probably me.

♣ If I ever became a professional poker player (albeit one that loses very quickly for dramatic effect), my stage name would be "All-in BU-BU". Then I could play in large poker tourneys with thirty-nine other players and accuse everyone else of cheating with tantrums and lots of swearing. I would sell the memoirs as All-in BU-BU and the Forty Thieves. 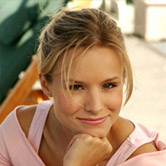 ♣ When not playing Warcraft or organizing the Java course at work (which started this past Wednesday), I finished the second season of Veronica Mars on DVD, as well as the third season of 24. Both seasons I would give the grand rating of "Pretty good to pass the time", but I'll reserve longer reviews for next week's Capsule Review Day (which are never planned but usually pop up when I've run dry on my typical verbal vomit). Kim Bauer did not get devoured by a cougar this season

but I really wish she had.

♣ Booty has not yet devoured Lake or Punchy, but I expect that it's only a matter of time. She has two days left in which to make her meal.

♣ I have no major plans this weekend, although I'll be meeting my old friend, Madeleine, for lunch in Arlington on Saturday before she permanently moves back to Texas with her husband. I'll probably get a few hours of work in on Sunday too -- I've gotten into a nice rhythm of oddball work times that clear out my weekday afternoons like a scheduling laxative. After Tuesday and the end of the Warcraft grind, I'll have more free time than I'll know what to do with, and I've already got a few musical germs floating around in my head, just begging to be recorded in the computer and turned into some cheesy 70s funk chart. I also finally plan on getting around to writing up a will in case of that tragic tuna fish mishap. Who wants some money or cats?

How to get ahead on the dance floor