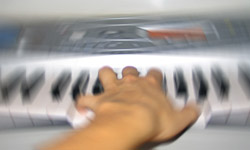 The last hardcore composition I wrote was my Master's thesis, an obviously light-hearted fifteen minutes of bombasticism finished in January 2003

. The last composing I did at all was a brass quintet commission of God Bless America in November 2003. Since then, all I've done are a few middle school transcriptions and the occasional preservation of a catchy germ in my head (so I have date stamped proof when some television clown steals my melody, after which I will sue them and live the remainder of my life in luxury on a houseboat on the Potomac).

After almost three years away from the keyboard, I decided this weekend to start composing again. This is a daunting task on a good day, but it's more ominous for me because of the way I go about it. Many people can compose in their head, recording their music to paper at sporadic moments whenever genius should strike them. For me, composing is work -- a very rewarding work, but work nonetheless. If I am composing, I have to put in some time every single day to doodle on the keyboard or write down a few bars of a melody until I have a direction. I will put out several cubic tons of garbage during that time, and a few unpolished fragments that just might end up being worthwhile if I chip away at them some more. I have to devote this time to writing soon-to-be-discarded crap or the good stuff will never appear.

Composing is just like writing a story in another language. Even if you have a superb grasp of the English language, that doesn't mean you automatically get the spark of inspiration as well -- there will be long bouts of writers' block or false starts and meandering plots which may not end up in the final product, but are critical to the organic growth of the idea. At the moment, I'm just content to recording silly little melodies and relearning the ins and outs of Finale. Maybe in a few weeks I'll have enough dross to weed through and I'll actually start writing a piece.

What will I write? Probably music that your average listener can connect to, and nothing that you would hear on an avant-garde "Student Composer" concert (and not just because I don't know any solo flutists). I'll probably write some jazz charts because I enjoy jazz counterpoint and voicing solis, and I'd like to write some fanfares because they say what they have to say and then shut up. I would still like to write a rock or pop chart someday, as long as I don't have to do the lyrics myself, since all my lyrics tend to come out as the trite sister to emo. Got any lyrics? Maybe we can be a joint collaboration like Rodgers and Hammerstein, or Usher and Lil Jon.

Does today's graphic make you dizzy when you stare at it? Then my work here is done.