In honour of National Talk Like a Pirate Day, here is a smattering of pirate-related merchandise and goods I've plundered in my days as a peripatetic peg-legged prowler of the seas.

1) Pirates of the Caribbean: Who would ever believe that a five minute theme park ride could turn into a movie that didn't really suck (even though it was about twenty minutes too long)? Of the few times that I went to Disney Land, this ride was my favourite, and I would patiently wait in hour long lines just to sit through a a completely non-interactive ride. I wasn't even that impressed with the animatronics, though I do remember being in awe of the way they simulated burning buildings with a fan and some red silk flapping in the breeze. I still haven't seen the second movie, but I'll definitely give it a watch when it comes out on video. 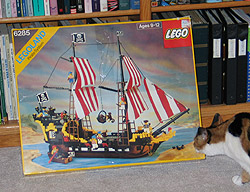 2) Black Sea Buccaneer: Legos were segregated into sets based on the types of creations you could make, like the Town set and the Space set. Up until the late 1980's, the Castle set was easily the coolest of the Lego sets, because it had fun things like secret passages and glow-in-the-dark ghosts. This all changed with the introduction of the Pirate set, which I promptly snapped up in its entirety. I used to create the entire pirate armada as well as all the bases like the El Dorado Fortress, set them up on the dining room table, and then have sea battles with the guy down the street. Sure these Lego parts were so specialized that you couldn't make anything outside of the instruction manual, but they made up for this with monkeys, pirate maps, and chests full of doubloons. The Black Sea Buccaneer was the largest ship in the pirate armada and is one of the few sets that wasn't sold at a yard sale while I was away at college. Only time limits for my press deadline prevented me from reconstructing the entire ship for this update. Instead, you'll have to be content with a picture of the box.

3) The Pirate Song by Ray Stevens: This is self-explanatory

4) Booty: This, too, is self-explanatory. 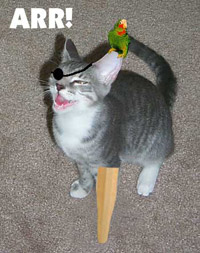 5) The Secret of Monkey Island

: The four-game Monkey Island series single-handedly introduced the concept of humour into computer games. You played Guybrush Threepwood in his quest to become a pirate, fighting the ghost pirate LeChuck and engaging in all the classic pirate activities. Just mentioning this game makes me want to reinstall and play them all again.

(Runner-Up) Hi-C: Because without these, the pirates would have nowhere to sail!

Stop This Glorification Of Pirates In Our "Culture!"

He didn't cross the line in the least bit

Some people have strange fantasies