Portraits of the Artist as a Young Man

Looking at old class pictures can be nostalgic, but it also shows how quickly you forget the people you spent 180 days out of the year with in a compulsory educational setting. At one point, I probably could have given you complete biographical sketches of everyone in these pictures down to what they usually wore to class and what their favourite legume was. Now I'm lucky if I can remember their first name at all! 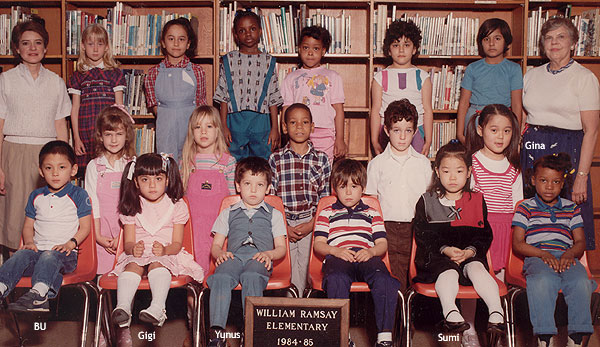 This was the A.M. kindergarten class at William Ramsey, the only grade I ever attended there. In a system that only made sense in Alexandria, William Ramsey held grades K, 2, 4, and 5, while its sister school Jefferson Houston (conveniently located on the OTHER end of the city) had grades 1, 3, and 6. Yunus was a Turkish boy temporarily in the US because his parents worked here and was a habitual play mate after school. Gina was a fellow Korean adoptee and friend. Once she wrote me a letter saying "I Love You" so I wrote back with the same thing and my whole family made fun of me so I got angry and tore it up. Gigi was very quiet, unsettlingly so. Her eyes in this picture see into your soul and that invisible game controller she's clenching with such fervor is probably forcing you to do something evil. Look away! 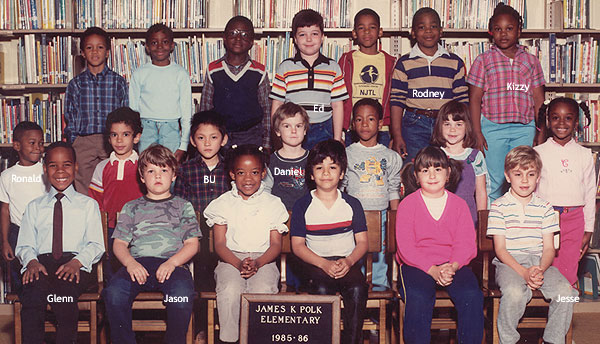 First grade at Polk Elementary, the year where some kids' feet actually touched the floor. Ed disappeared from my life after this year only to reappear ten years later as a Boy Scout in my Scout troop, oddly three or four years behind me. Rodney eventually became a well-known football player at T.C. Jesse was the guy of the origami-swan fame and Jason was my best friend who lived in Brookville and had lots of G.I. Joes. I never had G.I. Joes because they were brand name and too expensive, but I did have a million generic army men with no movable parts (buy one bag of a thousand men, get a second bag free). I was sporting my "just woke up" hair that day, trying my best to impersonate the kid, Daniel, on my left, who I can easily picture as a crotchety old coot making moonshine in West Virginia, and/or addicted to meth. 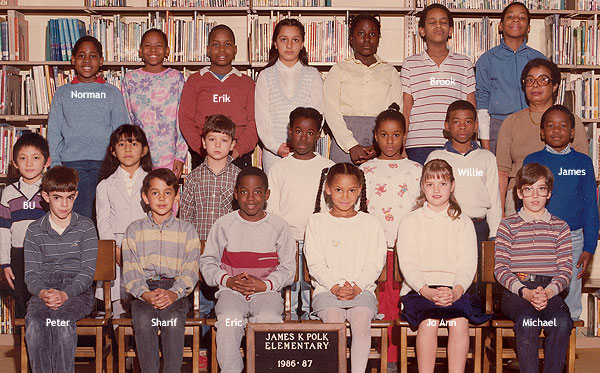 Third grade, the year where the photographer did not understand the concept of putting the tallest people in the middle. Erik had a twin brother named Derek. Brook contacted me in 2005 out of the blue but I remember very little about him. Willie had burn scars on his face. We called James "Oreo", because his last name was "O'Rea", not because we were racist pigs (we were and still are and we also hate Commies). Sharif was the neighbourhood troublemaker that no parents ever wanted invited over. 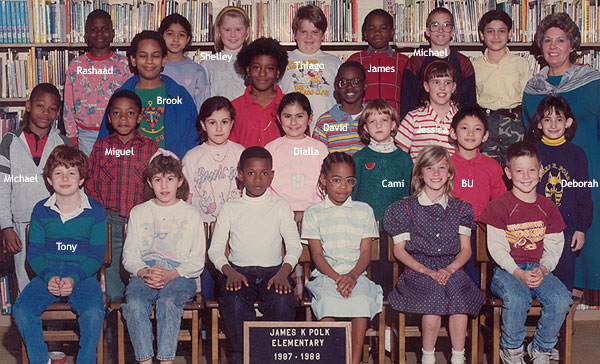 They actually put a few more white kids in this fourth grade class, although I was still the only Asian for miles around at Polk school. Shelley's mom was my sister's Girl Scout Den Mother, and her sister married my next-door neighbour years later. Thiago became the bass drum and cymbal player in junior high. I pushed Michael against a wall because he called me Lambchops and would pull on my sideburns. I have a video of Miguel at my fourth grade birthday party telling the camera that his favourite activity was "relieving my system". Tony is the situp-fart boy. Deborah was one of about six other friends who regularly hung out together. I don't remember who the girl in front of me was, but I bet she grew up to be hot. 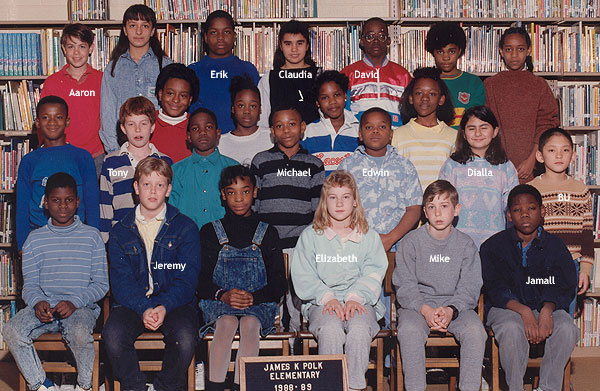 Mr. Ferris' fifth grade class was mostly a bunch of miscreants and malefactors (for example, I used to get 250-word punishments all the time for talking too much). Aaron was my friend who lived down the street -- we walked to junior high every day. I remember Edwin getting in trouble a lot. Jeremy and Jamall were in our extended circle of friends that we hung out with at school, but not so much at home. Mike was another close friend whose parents obviously didn't believe in dressing up for picture day.

Sixth grade? They got rid of the Picture Day nonsense and created a $10 yearbook that was black and white and low enough quality to have been made in a third world country. You can barely make out any of the faces, much less my own beaming one.

From there, the lovers conducted an on-and-off relationship with the aid of an English-Spanish translator.