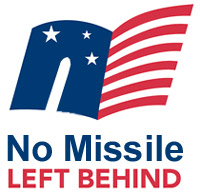 After eight other tests and over one hundred billion dollars in funding (which would buy 22,935,779,816 two-piece meals from Popeyes), one of the United States' Intercepter missiles completed another successful test this past week, raising its success rate from 50% to 55% and effectively removing the program from the No Missile Left Behind blacklist. Although the naysayers may disagree, the Intercepter program has proven its worth against any enemy missiles meeting the following criteria: 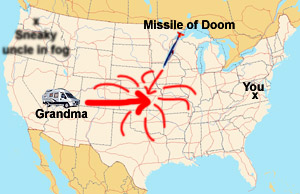 Rumours hint that the private sector may be interested in licensing a modified version of an Intercepter to seek and destroy incoming caravans of in-laws and unwelcome relatives during the holiday season, and Google has even stated that they have already eliminated the fogbound requirement with the Google Earth software they used to take pictures of Seattle. Defense Secretary Donald Rumsfield refused to comment.

Much ado has been made about the refrigerator-sized kill vehicle located on the underside of the Intercepter. Based on stock footage released by the Pentagon, amateur Photoshop enthusiasts recently discovered that the kill vehicle is, indeed, a refrigerator, which makes the enemy missile doubt its self worth by telling emo jokes about bulimia and obesity. In a reversal of sorts, this piece of the Intercepter was actually conceived by a Houston inventor who found no market in his city for a device that keeps people from eating.

When asked to rate the program's effectiveness on a scale of Excellent-Good-Poor, Lieutenant General Henry A. Obering III chose "Good" but added that Excellent was just another one hundred billion dollars away. Obering also said that the next test would more accurately mimick real-world conditions with less predictable targets.

It's not just the created shapes, it's the parts cut out as well

Decline in the number of Cocks