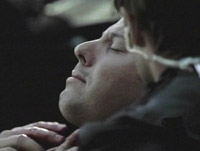 During a season premiere of Alias, Agent Weiss gets shot in the neck and vanishes for several episodes, only to reemerge from the hospital, hale and whole, towards the end of the season. In the ninth season of Friends, Chandler's job gets relocated to Tulsa, which results in him getting about two minutes of screen time each episode (usually making a self-deprecating joke about his job before exiting stage left). At first glance, these seem to be oridnary plot twists, meant to bring a fresh perspective or introduce new drama in an otherwise familiar storyline.

The actuality is rather mundane -- the storyline was changed to accomodate the schedule of the actors involved -- Greg Gunberg got a part on a new pilot (and returned to Alias when it wasn't picked up), and Matthew Perry was rather preoccupied with his latest bout of rehab. Remember Rose from the first season of LOST who was all over the place in the first couple episodes, never to be heard from again until season two? She got a part in a play.

This type of thing happens a lot on TV shows, and often makes me wonder just how much of a storyline is dictated by the writers and how much is subpar because the actress got pregnant or the actor had to spend two months in jail for DUIs. In a show I'm currently watching, one of the main characters up and moved to Chicago for a couple episodes (which also cut out a whole stable of supporting characters). He came back a little while later, and the entire subplot for his move was quietly buried, like a story about Democratic Party conspiracies in the Post. 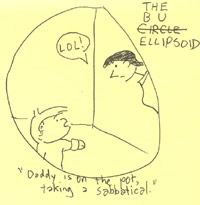 If only the jobs of us plain folk were as accomodating. It would be nice to skip out on work for a couple months with a suitably dramatic cover story like "BU missing at sea after a tragic tuna fish mishap" only to pick up where I left off without having to answer any questions or tie up loose ends. Unfortunately, the only jobs where that works are cartoonist and professor, and (despite my prodigious talent at both, see inset right) neither one of those pays the big bucks needed to support the continued purchase of all these ridiculous TV shows on DVD!

Minutes later, a friend alerted me to the "facebook is now creepy" group someone had already started at Pomona College.