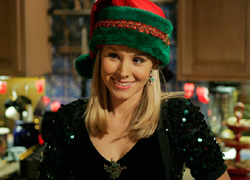 Veronica Mars - Season Two:
Veronica Mars is like Buffy the Vampire Slayer without any supernatural elements -- a detective story set against the backdrop of high school. Each episode is a mini mystery overlayed by an ongoing mystery spanning an entire season. I was thoroughly if suprisingly entertained with the first season, so I had high expectations for the second season. It was still entertaining, but sacrificed the well-constructed character relationships that made the first season so good, moving the emphasis to plot instead. It's as if the writers felt like they had to outdo the old mystery of Lilly Kane's death, and worked so hard that they forgot some of the original worthwhile elements. There are too many main characters and shady subplots that go nowhere, and the episodes seem very oddly edited. Sometimes I felt like I had just missed a scene somewhere,

yet it was just a case of abrupt transitions or plot lines that didn't quite mesh.
Bottom Line: You will still like this season if you loved the first season, but it's not quite as good. Kristen Bell is still hot though. Then again, girls are always hot in Santa hats (see also, Mean Girls). 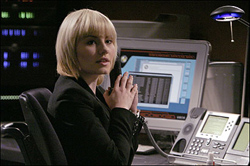 24 - Season Three:
This season takes a while to get cranked up, but was entertaining enough to keep us watching. The storyline is divided into three 8-hour sections which honestly have nothing to do with each other (and even conflict with each other) but the clock moves too fast to really stop and think about how many plot holes there are. The President's plotline this season was anemic, and they should have just had Kim Bauer move away rather than put her in the Counter Terrorism Unit with her fake hair and bad acting. I don't even think a Santa hat would help her.
Bottom Line: About as good as the previous seasons. Best watched without someone else who doesn't mind making smartass remarks at the overly dramatic situations. Jack Bauer is still a captivating actor though.

LOST - Season Two:
I'm in the process of rewatching this season so I have a fresh perspective when the third season starts in October. I still think the second episode, where two characters sat on a raft for an hour yelling, was the worst episode in the history of episodes, and they reused the "Meanwhile on the other side of the island..." approach too much, but the story kicks back into high gear once people on opposite sides of the island reunite.
Bottom Line: Ana-Lucia was a horrible addition to the island, but I could watch the interplay between Mr. Eko and Locke for hours. Definitely worth a watch, but only if you've seen the first season.

Arrested Development - Season Three:
Despite an abbreviated thirteen episode season before cancellation, this show still has the perfect execution of the "running joke". Plot elements and absurdities from all three seasons tie together here, and occasional moments had me laughing out loud. Towards the end when they knew they were being cancelled, some of the shows are hit or miss, but there's still enough to keep you laughing to the end.
Bottom Line: You can watch all the episodes in about four hours, so you might as well exercise your funny bone.

Lollipops to shut up the drunkards