25) I was in ninth grade one year before it seceded to form its own union (making schools become K-5, 6-8, 9, 10-12) so being a freshman meant being at the top of the school, not the bottom. Somehow I was in the popular crowd and actually had my own cadre of kids that would follow my lead. We would often make fun of kids, especially the fat girl in band, for no other reason than the fact that we were kids, and kids are inherently cruel. One day after making fun of her, her friend asked me, "Why do you have to be so mean?" It was then that I had a Lifetime/Oh! epiphany that I was a mean little prick, and I wouldn't want to be friends with me. From then on, I've always been acutely aware of the people around me and the words coming out of my mouth. I like to think that I've become a pretty nice guy since then. Once, I fed a stray cat. 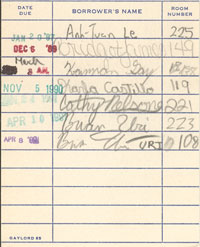 26) I spent a lot of time in the library. It was there that I first discovered Ellen Raskin's The Westing Game which is a must-read if you've never read it. There was also a book in the library by my favourite author that had been out of print for ten years, and had only been checked out a handful of times. It has been sitting on my shelf for thirteen years now and I've probably read it at least once a year since then. Had it stayed in captivity, it would probably still be sitting on the shelf, waiting for no one to check it out.

27) Doing Crew put me in contact with a lot of kids that went to the other junior high, G.W., and that's how I met my friends Jack Wilmer and Ben Seggerson. I ended up liking a G.W. girl and resolved to invite her to our Freshman Prom (a massive step for our introverted hero). While I was getting up the courage to ask, some clowns from my school decided that I would never get a date on my own and set me up with another G.W. girl (girl B). They told her that I wanted go with her, so she blindsided me one day by asking me if she could come with, expecting the yes to be a formality. At a loss, I said no and raised the ire of all the G.W. people who suddenly knew me, not by name, but as the guy that supposedly invited girl B and then dumped her. Despite this, I weathered the storm and asked girl A, who surprisingly said yes. In Act II, of course, the powers that be decided to host both school's proms on the same night, and girl A understandably wanted to go to her own. I wanted to give up and stay home since the prom was mere days away, but the pleading of my friends and the fact that my parents had already bought me a suit convinced me to keep searching for a date, in an increasingly embarassing round of sitcom-like situations (I even asked girl B, who said no, but we became friends after that so it didn't all turn out badly). Ultimately, I asked a pretty eighth grader in my French class who said she'd get back to me. When she called the next day, she declined, because it turns out that her freshman sister liked me. And that's who I ended up going with. I don't think either one of us had very much fun, but I did dance.

27.5) This story is the reason why I have an aversion to drama and never meddle or play matchmaker in other peoples' business. It never ends well, although I bet I could make a fortune selling a pilot episode to the WB. The actor playing me would have to be white though -- male Asians just don't sell. I love hearing about other peoples' drama, but I try not two add my two cents (20.7 won) unless asked.

28) Tenth grade at T.C. was a reasonably enjoyable year. The only shocking part was discovering that the upper echelon of popularity at Hammond Junior High could never get higher than third tier at T.C., where G.W. and Hammond students were forced by law to share the same high school environment. Suddenly there was a brand new clique of rich yuppy kids who had BMWs on their 16th birthdays and shopped in bulk at the Gap. I used my Asian skills of stealth to infiltrate these ranks via Crew, which was a rich man's sport, so I could hang out with all of them in a friendly manner without having to be rich and cool. I definitely was NOT cool.

29)I was still fooling myself into thinking that a colour-blind guy could make a living as an artist, so I was still enrolled in Art class. Kim says that her freshman art class was the central repository for delinquents and ADHD kids needing an outlet, and that pretty much held true at T.C. too. The only worthwhile thing I made in that class was this sculpture of a bear at a spring. Following my lawsuit with ABC concerning the origin of the "strange polar bear on an island" idea they're using in their hit show, I will use my litigation money to open an art gallery with all the abortions I called Art

. Actually, the bear was only white because the other options were brown and pink. Apparently kiln-paint is limited.

30) I did indoor track in the winter because people said I was fast and I thought it would be fun to sprint. It is not fun to sprint. It isn't even fun to try working out in the winter, when any sane human being should be hibernating at home with a good book or computer game. I diligently went to every practice and track meet though, and they diligently put me in every race that didn't matter. I liked the 55m dash, because it was over in ten seconds. I hated 500m, because it was 2.5 laps around the track. I loved the 300m because it was the perfect length, but they never put me in that because I was too slow. It did put me in shape for all those spring Crew runs though. 7 miles to the airport and back is a long way.

31) I hated Eleventh Grade with a passion. If my hatred were a fruit, it would be a passion fruit. My sister had just gone to college so I was suddenly the only child which made home life uncomfortable. All my old friends from Hammond were drifting off to do their own things and all my recent friends from tenth grade were in other classes. Plus, I had zero classes with the girl I was majorly in love with (as was every other straight guy in the school) and my poor attempts at spending more time with her didn't work out so well.

32) I did join Jazz Band this year which completely turned around my musical ear. Up to then, I never listened to music on my own (except my copy of Soundtrack from Dances with Wolves which was scratched to pieces) and I was only ever exposed to the choral music played by my dad at dinner (this was just before he started playing tuba again, at which time all the choral dinner music was replaced with low brass dinner music, if that is, indeed, a genre). After joining Jazz Band, I listened to big band jazz 24 hours a day. Every year, I would write to the publisher, Kendor Music, pretending to be a jazz band director and asking for their latest music. They would send me full minature scores of all their newest music with a tape of a studio band playing it all. This is how I learned jazz harmony and voice leading. I listened to those tapes and CDs of the Tonight Show Band religiously.

33) It was in this grade that I realized there was a seedy underbelly to our class, consisting of kids who looked and acted like any other during the day, but did all kinds of drugs, cigarettes and booze after hours. Surprisingly (or not), none of those people were from Hammond. To this day, I haven't done and drugs or cigarettes, and I didn't even drink until 1999 or so, but I know plenty of close friends who were probably not expecting to ever work for the government when they did things back then.

34) I loved every minute of senior year, and I've concluded that the reason for this is that I had no serious boyhood crushes going on. Life is a lot more laid back when there's no relationship drama or pining going on. I did have crushes on two freshman at various points (SCANDAL!) but they were short-lived. If I were given one year of school to do over again as is, it would either be senior year or my fourth year of college. I looked at my senior yearbook and noted, with some sadness, that the number of signings talking about my mad calculator skills outnumber the ones mentioning musical things by about 3 to 1. When I go, I hope my tombstone reads "Musician, Playboy, and Statesman" rather than "Computer Scientist".

35) I was the sole drum major in my senior year, which means that I was incredibly cool in the band hierarchy (ignoring, for a moment, that even the most popular band guy barely beats Future Business Leader of America president in the Rock, Paper, Scissor battle of high school popularity). Kim was a tenth grade flute player under my benevolent dictatorship, but I honestly cannot recall ever speaking to her directly (maybe it was against the caste system to do so). I do remember conducting one of my compositions at Hammond Middle School and getting so exuberant in the finale that I knocked over the first flautist's stand. Dr. Jacobsen of VT told me once to stop calling flute players flautists because it makes them seem uptight, but I think it's a fun word to use. I learned it from reading Who's Bugs Potter? by Gordon Korman. I still have never read Bugs Potter Live at Nickaninny which is tragic. If I ever see it in a library, someone will have to stage a diversion while I permanently borrow it.

36) I finally enjoyed Crew in my senior year, probably because I felt more confident being the coxswain for a bunch of guys in my same grade level rather than a grade higher. I maintained my two year streak of NOT getting thrown in the Potomac River by being sneaky at the end of the year. I remember being an eighth grader and taking a bath as soon as I got home if the Potomac River even splashed on me in the boat -- all the horror stories about it being toxic like the exploding silo scene in Robocop were probably overrated.

This concludes my overly verbose memories of primary education. If you enjoyed reading these, let me know, and maybe I'll do a college edition some day. Have any fun or embarassing memories of your own? Share them in the comments section!

We will robustly prosecute anyone who breaches these new security measures because they have been introduced by the Government and we are obliged to enforce them.