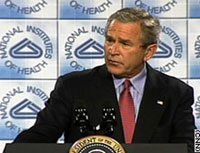 In an effort to muddle up the more salient issues by introducing several new ones, President Bush has requested $7.1 billion in emergency funding to combat the possible bird flu pandemic which has been rumoured to be lurking in the shadows for several years now. After ten minutes of giving shout-outs to his dogs (but no nominations this time around), Bush gave a doomsday speech at the NIH which sounded vaguely familiar

. Some conspiracy theorists note that the speech is identical to the one kicking off his war on terrorism, replacing the words "terrorism", "Iraq", and "insurgency" with "pandemic influenza", "China", and "outbreak". I'm always amused when Bush tries to talk in technical jargon, but luckily there were no nucular mistakes this time around. In fact, he was so well-prepared that he squeezed the phrase "pandemic influenza" into his speech three times. And since every crisis needs a buzzword, he used the word "pandemic" a whopping seventy-one times in the course of his diatribe.

Since most clueless uneducated constituents think a pandemic is a syringe used in physicals on the baby Panda Cub, Butterstick (English for Tai Shan), I'm sure the speech will have its effect and put people into I'm-scared mode (which, coincidentally, is a mutually exclusive mode from "paying-attention-to-scandals mode") for the coming months. Bush will get his money (but not at the expense of his "Let's Visit Mars" program or his "We're Winning in Iranq" program) and the media will spend weeks showing how birds die from the flu, since this is much more compelling imagery than a closed Senate hearing on government missteps.

I'm all for protecting myself from sickness, but this latest scare tactic is just as useless as the whole terrorism campaign. The reason? Scared or aware citizens are no better prepared for the danger than unaware citizens. You can warn everyone in the country about the bird flu, but all you're doing is seeding unease -- it's not like they can all report to the doctor the next day and get completely immunized. If Bush really wanted to fix the problem, he would work with drug companies behind the scenes to prepare ample supplies of vaccines rather than deliver end-of-the-world monologues to the powerless people. 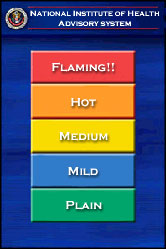 With a new common foe for us to unite against, it is only fitting that we create a new Pandemic Influenza Terror Chart, so we can raise and lower the Threat Levels appropriately as elections and hurricanes threaten to distract us from the real dangers of the flu. As a public service, I have outlined the five levels below. Please presume, for the safety of you and your family, that we will never be lower than code Medium.

I have also created these posters which you should print and distribute in your place of work. Feel free to reuse them on your own site -- it's the only way we can get the word out about the pandemic. 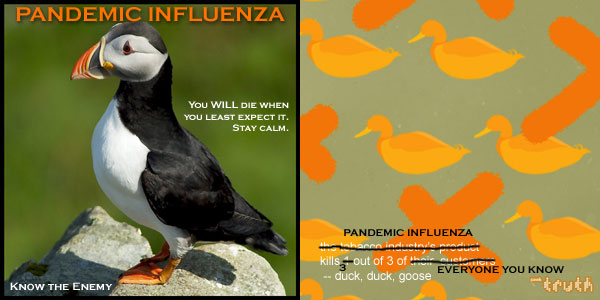 How to rob a bank dramatically