If you are a regular reader of the URI! Zone, and you have never had any unfortunate run-ins with crazy stalkers who chopped the legs off your stuffed animals, which ultimately led to a paranoid fear of displaying your zip code to the public eye, take a moment and add yourself to my Frappr map of URI! Zone patrons

. Frappr is a cute little hack for the Google Maps interface which allows geographically challenged members of a group to figure out where they live based on their zip code (or city, for the United-Statesally challenged). 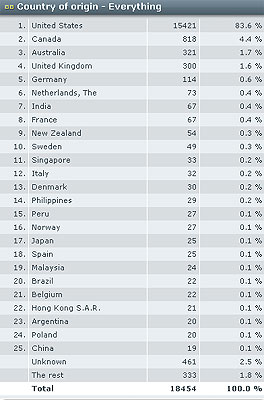 I am one of those web site owners that is addicted to web statistics. I peek at my counter every couple hours at home (and roughly every eight and a half minutes from work) and run the reports for all the funny Google searches every morning when I wake up. As you can see from the table on your right (left in Great Britain) which lists all the visits since I bought the domain name in October 2003, my site caters to a mostly North American crowd, although I have a decent minority of Aussies, Brits, and Germans. For this reason, I occasionally throw in some non-North-American content, like this joke:

An Australian, a Brit, and a German walked into a bar. Ouch!

Little touches like this cement my worldwide appeal, as proven by site regular, Rachel, from the penal colony country. What worries me though, are the final two countries in the list: Unknown and The Rest. Since the report generator chose to separate the two, I'm presuming that Unknown is a real, standalone country inhabited by three-headed wheat people who get their Internet via fiber-optics.

, I cycle through my bookmarks repeatedly even when I know that CNN has posted no new news, or Chompy has not updated his blog since last Thursday. I am usually the first to see breaking news, whether it's the time George Bush choked on a pretzel and passed out, thus increasing the damage to his brain

I check my e-mail when I first wake up in the morning, and I check it as soon as I get home from work (even though I checked it right before I left, seven minutes earlier). This does not help me respond to e-mail any faster though -- I either respond immediately or nine months later. If I have not responded to an e-mail after a week, it will generally fall into a "they didn't follow up so it must not have been urgent" folder before being forgotten for good. I am also notorious for being the one to end a back-and-forth e-mail convo, simply by not replying. This must be done with style -- when you decide that you're going to stop, you can't just stop writing back, because then people will think you choked on a pretzel and will call 911. You really need to use the Force of Friction approach, where you progressively slow down your responses as if you're running out of letters to type and must conserve them. Eventually, only the most persistent corresponders will be left behind (right behind in Great Britain).

How to tip a cow

"I wanna hang a map of the world at my house. Then I wanna stick pins in the locations that I've traveled to. But first I have to travel to the top two corners of the map so it won't fall down." - Mitch Hedberg