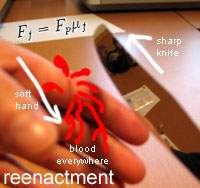 I removed the bandage from my finger last night to find that the gaping wound was healing nicely, although my finger smelled like death after three consecutive days of being covered.

Speaking of things that smell like death, I voted after work yesterday. I'm sad that Levi Levy did not run for anything this year

. I, too, am concerned about the possibilities of typhus spread by wharf rats, and I was not a resident of Virginia the last time he ran for office in 2003.

I find it amusing that the sample ballots those clowns distribute outside of the voting centers not only show you how to vote for candidates along the party lines, but also how to vote on referendums too. I apparently went in the Democratic door, and took one because it's easier than ignoring the volunteer. The Democrats wanted me to vote for all three Democratic candidates (not surprising) and also to vote YES for all eight or nine school construction referendums (also not surprising).

Ultimately, I voted for the Democratic representatives and NO to all the requests for construction money, except for the school in my neighbourhood. I figure that kids are quite far off in my future, so a lack of new schools won't bother me for quite some time (I voted for the local school so I can sponsor classes on where your garbage does not belong, like the mouth of a lion or BU's front lawn). Plus, if the decision ever comes back to harm my child's education, I'll just demean his intelligence, enroll him in vocational school and convince him to become a plumber (this will also save on college expenses). My erratic voting record is most likely the reason neither major party would want me as their spokesperson, though I had a 100% track record at voting for the losing candidate in all major elections until last night. I guess Kilgore blew his remaining funds on the Presidential endorsement and didn't have enough money to buy the ballots off all those dead folks. All the schools won quite handily though. It's cute that the Rolling Ridge Elementary School had a higher margin of victory than the Republican candidate for governor.

This dovetails nicely into the announcement of my intention to run for Virginia governor in 2009 at the ripe old age of 30. I will outlaw SUVs and widen all roads that lead to wherever I want to go, and you can bet your ass that I'll be running on a platform so people can see me over top of the podium when I give speeches. Taxes will remain the same, but I will generate extra revenue by claiming all the possessions of people in jail, much like they did in feudal times. I've hired a major advertising firm to create a highly innovative campaign poster, which you are welcome to print out and post on your fridge.

eBay bully will call you a schmuck boy

Witnesses told police the women were having sex in a restroom stall, angering patrons waiting in line.