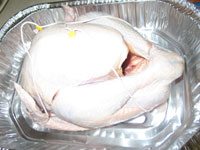 This is the turkey I made for a pre-Thanksgiving dinner on Sunday. While cramming its posterior cavity full of stuffing so it could be roasted, I noticed something that I probably always noticed but never really thought about -- when they package the bird for public consumption, they ram its legs up its own ass so the bird has no wiggly parts when it's shrink-wrapped.

It's not enough of a humiliation to be raised and killed for the sake of some unappreciative family's tasty treats. They also tell the birds, "After your dead we're going to kick your ass with your own drumsticks" and then turn the bird into some macabre avian Cirque du Soleil performer. I'm surprised that they don't poke the wings down the neck cavity, but I guess it would look too much like someone spelling the M in YMCA.

Here are two more things that I've learned while hosting, shopping for, and preparing holiday dinners this month:

Today's update is short because time is short and I am shorter. I will make it up during the rest of the week -- I promise! I already have a theme picked out for Tuesday through Thursday.

What else would you find in Smoke Tree village?

A cure for high housing prices in Indiana