Ho ho ho (get it?) and welcome to the Holiday Edition of the URI! Zone. Here is my weekend wrap-up in nine thousand words or less (most likely less): 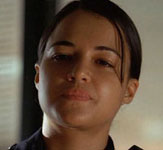 Left work at noon to sign for a "signature required" UPS delivery expecting it to arrive around 3 PM, only to discover that the assclown now runs my neighbourhood at noon. Missed the delivery by 14 minutes. Also noted that said assclown decided to take Friday off, so the 2nd Delivery would not be until the following Monday. Cleaned out the office and threw away two bags full of useless papers and manuals. Watched LOST which is starting to return to the first season's levels of goodness. Decided that Ana-Lucia is actually a good character but Michelle Rodriguez is just trying way too hard to make her hardcore. Thought that Rodriguez would be much more palatable if she'd just get that goofy look off her face. Good episode overall, now that there's forward motion in the timeline. Still think that Mr. Echo is the most interesting character on the show right now -- want more Locke-Echo interaction. Looked out the window and saw snow and peed in my pants. Took a picture. Of the snow.

Thursday
Went to work in a quiet office with only Justin Spradlin on the fifth floor. Slipped into the abandoned HR offices and adjusted my salary by a few decimal places. Went home and gave the cats extra helpings of their turkey dinner, A.K.A. the usual crappy food. For Thanksgiving, crashed a family dinner with a family that was not my own, and had prime rib and salmon. Then went to see Yours, Mine & Ours, a patently inoffensive family movie that was pretty funny. Had a great time overall. Drove back from Alexandria in the rapidly frigidizing weather, passing an accident on the Toll Road where a minivan apparently stopped in the middle lane and caused a chain reaction. Went back to work for a couple hours to do some time-sensitive work and appear hardworking, then went the rest of the way home around 9:30.

Got up at 5:30 AM to go on a Thanksgiving Hike at Old Rag Mountain with the Spellerbergs. Hiked all the way to the phone, cancelled, and went back to bed after discovering that the temperature was below freezing. Woke up at 7 AM and played Warcraft for a few hours. Cleaned and reorganized more of the house, and then drove over to Anna's house. Made cookies and brought wine so they would have some vittles when they got back from the hike. Rescued Sydney from the closet where she was trapped all day because she's a retard and goes into closets and hides. Went to Ruby Tuesday for dinner and had Mild Buffalo Chicken Fingers with non-spiced fries and mushrooms (this is obviously a new and varied meal for me), then came back to Anna's and watched Kung Fu Hustle. Decided it was cute for people who like kung fu movies. Decided that I am not one of those people. Drove home and slept.

Saturday
Woke up at 7 AM for errands. Went to Best Buy and got a third XM hub, so I can now listen to XM holiday songs in my office, in the basement, in my car, and in the living room. Visitors beware. Went to Petsmart and got a new cat toy which the cats don't really care about, and some vittles. Went to Target and got wrapping paper for all the gifts you guys are getting and some Christmas lights. Went to Costco for some groceries and also picked up The Broker by John Grisham. Came home and put up lights. Happy to have the only house on the block with blue lights. It is special (get it?). Had some hooligans over in the evening for the Virginia Tech - North Carolina game which Tech handily won 30-3 despite having the most boring first quarter in the history of first quarters. Went to bed and finished The Broker which was a pretty average Grisham book -- a page-turner involving some lawyers that's worth reading when there's nothing better.

Slept in until 9 (!), read the paper over a breakfast of leftover ham from one of my holiday dinners, and then raked the back forty. Did not have a forty during this activity. Watched some Alias, and then rearranged my office, because the holidays always infect me with the rearranging bug. Wrote this update and had a Totino's pizza for lunch. The End.

Those who cannot do, teach