My marathon month of hosted dinners came to an end this weekend, after hosting 24 hungry hungry hippos over three Sundays, with two hams and a turkey. I hosted a work dinner, a "friends and family" dinner, and a high school dinner, with a few lucky souls like Jack and Kim who got to come to multiple dinners, since I was unable to pigeonhole them into any one society. This increased their cheddar cheese soup quota, although I don't think it came out as well on Sunday as it did the previous two weekends -- the cheese disintegrated a little bit too far. I was going to do a "people from VT" dinner next weekend, but I'm tired of cooking and couldn't get enough people who didn't already have plans. I do think the month was a success though, and plan on starting a tradition every November. Traditions are fun. Maybe next year I'll have a bigger dining room table and can just host two enormous dinners instead of three smaller ones. Speaking of enormous hippos, did you know that you can buy a Hungry Hungry Hippo that's big enough to ride on? I rate this an excellent use of plastics. 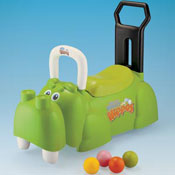 Now it's time for the real Thanksgiving. I am now a pro at the assembly-line approach to cooking, which involves prepping all the pots ahead of time and then whipping everything together into a five course meal in under an hour like a whirling dervish. Thankfully (get it?), the real Thanksgiving will not require an iota of cooking on my part so it should be quite relaxing. I'll also be working on Thanksgiving Day, but might actually take Friday off.

The forecast does call for snow showers on Thanksgiving, which will give it an appropriately holiday-y feeling, despite the constant rain that we've seen all week, and despite the fact that I have not yet put up my Christmas lights, simply because I can't find them. I think I threw them in the giant garbage bag of "Anna's Holiday Stuff" when she moved out, because it was easier to do that than actually sort through anything. The folks two doors down have picked up my slack though, since their holiday lights cover 90% of the house and will probably throw off a few airplanes flying into Dulles from Dayton. If I miss any updates next week, it's because a 747 has crashed into my court and my house is a smoking crater of plastic Santas and UL-approved outdoor wiring.

By the way, there are only going to be three real updates this week, so you will be treated to a rare occurence of Wednesday Fragments tomorrow. This can be directly attributed to the fact that I am a lazy son of a bitch, and will not be in the mood to type anything on Friday. I will probably post a smarmy holiday picture of good cheer on Thursday and make it count as an update. Why? Because the $100 a year I pay for this site gives me certain immutable privileges. It's good to be the king.

Assault with a deadly cactus

A man sought the help of a medium after he got tired of a female ghost who wanted to have sex with him every night for the last 16 years.