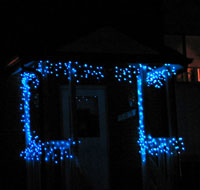 It has come to my attention that my list of Christmas gifts was not manly enough. Well, you see, I already bought all the manly presents for myself (including a backhoe), so those on the list are merely to balance out my imposing testosterony presence. That is all.

I wasn't kidding on Monday when I said that I listen to the XM Holiday stations all the time. Thanksgiving was a happy day since the stations turned on for the first time. XM has not one, but five different stations piping holiday music for the next month, one for pops, one for traditional music, one for classical music, one for country music, and one for weird and/or novelty tunes (like It's Christmas at Ground Zero). I could listen to this repetitive garbage all day long and not get tired of it (perhaps with the exception of the Country Christmas station). One alarming trend I've noticed on the pops channel though is the introduction of modern rock stars doing Christmas tunes instead of Bing Crosby and Frank Sinatra and the gang.

Don't get me wrong -- Harry Connick Jr. can belt out some catchy Christmas tunes, but the world does not need Michael Bolton, Whitney Houston, Barenaked Ladies, and Bruce Springsteen warbling through poor arrangements. I realize that they're probably inching towards bankruptcy and their holiday album is all that's supporting their cocaine habits, but I could sing a better Jingle Bells than they can. People who like Christmas tunes have simple tastes -- all you need are the standards, any music written before 1960, set in cute arrangements of winds and synthesizers, possibly with a boys' choir or some augmented sixth chords thrown in for fun. Generally when Bruce Springsteen comes on, I chastise him (because he can hear me via the satellite), and then change to one of my normal stations. I can't stand that guy's voice. Now all we need is the lead singer of Nickelback forcibly vomiting his consonants through an eggnog-induced haze of Deck of the Halls and we'll definitely be in the Christmas spirit. Seriously, they should mute his videos and dub someone better over top of him. Or he and Springsteen could do a duet and cancel each other out like standing waves of unfortunate taste.

There's a new episode of LOST on tonight. The title is What Kate Did, so I'm presuming that they'll finally reveal What Kate Did, or alternately just string us along with yet another worthless flashback (see also, Charlie is a Copier Salesman, or Jack is Sort of Married, Part II of III). Knowing ABC, they will swap it out at the last minute with the broadcast premiere of What Dreams May Come, starring Robin Williams and Cuba Gooding Jr. as a father and son who cannot act but think they're dramatic.

They should just tell us what Kate did then kill her off at the end of the episode, because let's face it -- Kate is hot but her acting is not. Next week another plane full of beautiful people can crash and the cycle of utopian life will continue.

Go where your customers are