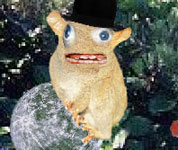 The Clinton condom will be the top of the line. The Monicondom is not quite as good.