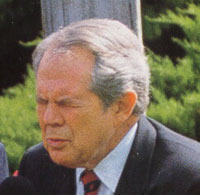 Today's update was originally going to be about swear words because I feel like I've devoted too many updates to the Hurricane aftermath, but after reading this juicy morsel of an article, I feel compelled to come back one more time (too bad it's fake, but it's eerily not far off base from reality). If you believed my Bob Vanhorn conspiracy theory (and you should because it's 100% true and will be proven in our lifetime), you'll get a kick out of Pat Robertson's theory that all of America's misfortunes can be blamed on Ellen DeGeneres hosting the Emmy's

. There are so many great quotes that I don't know where to begin.

"By choosing an avowed lesbian for this national event, these Hollywood elites have clearly invited God's wrath. Is it any surprise that the Almighty chose to strike at Miss Degeneres' hometown?"

"America is waiting for her to apologize for the death and destruction that her sexual deviance has brought onto this great nation."

This one is my favourite, and makes me cackle like a witch (or like the middle Rice Krispie elf if he couldn't roll his Rs):

"God already allows one awards show to promote the homosexual agenda. But clearly He will not tolerate such sinful behavior to spread beyond the Tonys."

I didn't realize that the Tonys were gay, or that God gave them the green light to be gay. I guess that's your loophole, if you happen to be a closet-homosexual addicted to the 700 Club -- just participate in the Tonys and you get the tacit A-OK from the man upstairs AND your idol, Robertson, to come out. Just make sure not to get fired from that gig, because He/he might have to change tacks and smite you. I'm surprised Robertson didn't order a hit put out on DeGeneres, but perhaps he's waiting until his check clears on the Hugo Chavez assassination.

Once I've become independently wealthy from my company's ESOP and my lawsuit against IBM (who still doesn't believe I patented the C: Prompt in kindergarten, even though I have the proof in my file cabinet -- they're trying to argue that it's just a wizard and I rotated the construction paper 90 degrees), I plan on having my own talk show where I can spout the most vitriolic sepsis known to man, all under the guise of being spiritual.

My show would be part talk-show, part sketch comedy, part improv, and part song-and-dance, because I think there is a massive untapped market for such a show

. I would Mao it up by making it a personality cult (using me as the figurehead) and then pick random causes for the masses of uneducated viewers to get indignant about. There would have to be some kind of quota system to keep things progressive, maybe two assassination calls per year, one holy war with an opposing religion (my club versus the personality cult of David Hasselhoff would be a good way to pick up the ratings), and four random acts of vandalism ("BU thinks the Blue Line is blasphemous -- you should all go down to the King Street Metro and fill the station with that self-expanding foam in a can"). I can already smell the recipe for a hit show. FOX, are you paying attention? You could really use me.

And smiting. My show will have lots and lots of smiting.