As exhibit A of my domestication, I present the "Merlot" velvet drapes I purchased on Friday for the downstairs guest room

. I applied my considerable Handy Man™ skills to hanging them this weekend, not realizing that I had actually only bought two panels, not two sets of drapes. I almost considered putting one panel on each window, but I think that constitutes a bannable offense in the Homemaker Club. So, I now have one window with drapes and one without, until I get enough momentum to roll through Target again.

Besides this brief foray into the world of home decoration and a few hours spent reorganizing my file cabinet (the one full of secret files on all of you), my weekend was relaxingly useless. I dusted off my copy of World of Warcraft and got a few more levels, finished off Harry Potter 4 (I'm rereading the series), watched some Lost (which won 6 Emmy's last night), and played Rock'em Sock'em Kitty Cats with Booty and Amber (Booty won, obviously). After the Hokies ran up the score against Ohio like a parochial schoolgirl with her first charge card (45-0), I went to Ruby Tuesday for dinner with Kim and company, and then played a round of guerrilla golf at the Kingstowne Putt Putt. We played on the "Mountain" course -- my initial thought that this was some kind of Earth, Wind, and Fire motif was proven incorrect when I saw that there were only two courses, and that the other one was "Desert" or something similarly earthy. My team obviously won the match (owing to my inspired Asian athleticism), despite the use of cheat codes on the opposing side.

On the way home from the festivities of the evening, I saw a ghost car!

It was about 12:30 in the morning and I was driving down I-395 towards the Beltway. One of the last conversations I'd had before leaving was about ghosts and their relative creepiness, or lack thereof. Right around Edsall Road, I saw an old-fashioned tan car in the HOV lane, cruising along at about fifty miles per hour. It looked very similar to the car Marty McFly drove to the Enchantment Under the Sea dance in Back to the Future, and I could see two people in the front seat -- a guy with a fedora was driving, and a woman with platinum blond straight hair was sitting next to him. The thing that caught my attention was that the woman was sitting in the middle of the car, not the passenger seat.

Being the typical Northern Virginia driver, I was worried more about passing this slow-mover on the right than catching ghosts, so I got out from behind the ghost car and sped towards the far right lane so I could get onto the Beltway. I didn't get to see their faces, but there was something very unnerving about how still the two people were sitting in the car -- it almost felt like I was looking at mannequins.

To up the creepy factor, the ghost car changed lanes as I passed and fell in line behind me on the exit ramp. Its headlights were golden-coloured, not white or high-intensity-blue like most cars. The beams were not high beams, but they had a certain malevolent intensity that bored into my rear view mirror, even after I'd flipped the magic angle button. It reminded me of the scary car chase scene from John Bellairs' The House with a Clock in Its Walls (raise your hand if you're old like me). It followed me until the Braddock Road exit, where I luckily lost it with some deft maneuvering in the thickening traffic. So was it a ghost car or just people coming home from a costume party?

I probably wouldn't have noticed the car had we not been talking about ghosts ten minutes before my trip, but I do believe in ghosts in general. Anna and I think our apartment in Centreville was slightly haunted because of the occasional weird sound which could not be blamed on central air, and the number of times the cats freaked out with no readily apparent cause for distress (see figure A, of a fat Booty seeing a ghost in the dining room -- incidentally Booty is much slimmer now, but maybe she's too skinny according to expert opinions).

I also saw a ghost at a party I threw around 1994 or so. We were all sitting inside watching a movie (because we were particularly happening and with-it teens) when a solid but not solid, luminscent but not glowing, woman in white glided past the window. She was bright enough to notice from inside, which meant that she was walking right where a big holly bush was. Had she been a neighbour or another random person, she would have been several feet father away, and not visible from the window. This sighting was confirmed by a couple other friends near the window, but we never figured out what it was all about.

There might also be a ghost in my office, although judging from the reflection it casts, it's not a vampire ghost. 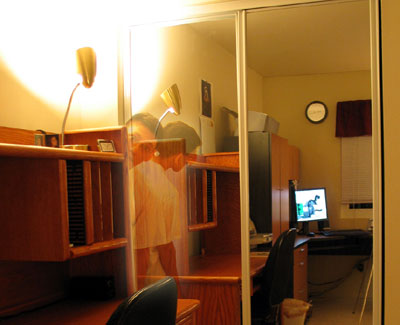 On an unrelated note, this week is Season Premiere week, starting with Arrested Development at 8 PM. It's followed by a new show called Kitchen Confidential which I have no interest in, except for the fact that it stars Bradley Cooper (Will from Alias) who's a really good actor. Early reviews say the show sucks but he keeps it afloat.

Man tries to turn it into the Fantastic Five

Say No to Fatties

Girls of the Gap