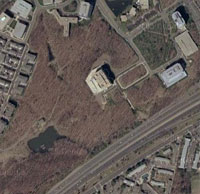 Yesterday evening, someone from my hometown of Alexandria found my site by Googling "winkler botanical preserve" sex. The Mark Winkler Botanical Preserve is a small wildlife area nestled in the shadow of I-395 where I played one summer (as previously reported in an August update

). I did not have sex there, being an elementary school kid at the time (sixth graders did not begin having sex on school buses and in nature preserves until over a decade after I'd grown up). Although this particular search phrase has a considerable ick factor (what if the searcher was a familiar face like the mayor or my old next-door neighbours?), I figured I would provide a FAQ for future visitors who are also interested in such knowledge:

Q: How do I have sex in the Winkler Botanical Preserve?
A: Visitors to the preserve are advised to have sex in the exact same manner as they would anywhere else, including, but not limited to, bedrooms, bus stations, and out front of a 7-11 with a day laborer. Protection, such as a blanket, is highly recommended, since roots and shrubbery may chafe people who are not used to the outdoor setting.

Q: Who do I have sex with in the Winkler Botanical Preserve?
A: Visitors may have sex with whoever they choose, though for maximum irony it should be someone named Mark Winkler (not to be confused with Henry Winkler, a.k.a. The Fonz). Google cites two possibilities: one is a male jazz vocalist and the other is involved with the Highland Hope United Methodist Congregation. They have the same eyebrows, though, so perhaps they are one and the same. Note: Mark Winkler of The Mark Winkler Company is not recommended, as he has been dead for many years, and that's just not cool.

Q: Where do I have sex in the Winkler Botanical Preserve?
A: We recommend the small lake in the center of the property (see the Google satellite image above). Visitors feeling particularly randy should stop off at the equipment shed along the banks of the lake, although you are more likely to be spotted here. If you require a bit more time to "get in the mood", you and your swain should amble to the opposite shore where the woods provide some semblance of privacy and any exclamations of passion will be drowned out by trucks downshifting on the Interstate. Get ready for romance!

Lost, Episode 2x01 "Man of Science, Man of Faith" premieres tonight at 9 PM on ABC. I'd post the episode summary, but some of my readers (like Jack and Kim) are still wending their way through Season One and I don't want to spoil anything. No Season One spoilers in the comments please! There's also a "This is what happened in Season One" catch-up episode at 8 PM, but if you need that then you really owe it to yourself to watch the DVDs instead. I, myself, am looking forward to the second season because J.J. Abrams is very good at creating shows that run for two seasons. Whether he can maintain that creativity into the third season and beyond remains open for debate (see also, Lauren Reed in Alias, Season Three).

My Name Is Earl was pretty funny, but I can see it getting really annoying and derivative before the end of one season.

Making Furniture on a Budget

Ken took the window out of the car, and reached in, and yanked the little puke out