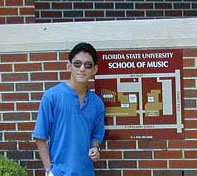 On Friday afternoon, I'm taking a weekend trip down to Tallahassee to visit the few remaining FSU people still clinging to the Spanish-moss-coated city like barnacles on a dry-docked hull. Florida-Mike and Florida-Kathy each chipped in a quarter of the cost of plane tickets for my birthday which was quite nice of them. I think it's ridiculous, though, that the flight from here to Florida is twice as expensive as a flight from here to San Diego, our country's Mexican outpost on the far seas. I'll be back on Sunday, so you probably won't miss any news updates in my absence. 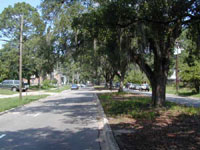 I lived in Tallahassee and went to FSU for grad school from August 2001 (when these daily updates started) until April 2003, except for the summer of 2002 where I was a societal parasite by living rent-free in Anna's parents' house in Chantilly. I wasn't in Florida for long enough to really make a mark, so I never totally considered it to be my home. Since I left, I've kept in touch with a few old friends, but no one in the music faculty at all, and I've missed the people without really missing the place. I haven't been back since my departure, so I'm looking forward to seeing what's changed and visiting the ghosts of my past.

I wouldn't change my decision to go to FSU, even in favour of some of those prestigious-in-their-own-minds Midwest schools I got into, because I learned a lot about myself in those two years. I learned that I love teaching as much as I loved conducting. I learned that I hate most "contemporary" music that composers are writing these days, and that I would never survive a career where I had to keep pretending I liked it, or had to write it myself. I learned that the art of composing is a finite resource, and that I would rather not do it as a career, than be churning out derivative garbage fifty years from now. I learned that office politics are stronger and more annoying in the academic world than the business world, and that for every passionate professor there's one that's just phoning it in for tenure. Most importantly, I learned that I needed to stop preparing for life and just start living it. Up to that point, I spent far too much time waiting for good things to happen and bemoaning the fate of my life's timeline. I'm sure most college graduates go through that phase where they're leery about entering the "real world" because they don't feel ready or they haven't met their future husbands and wives, and for me, going to grad school was an easy-out that turned into a solid eye-opener. Now, I'm forward-moving again, and if good things happen to come along, then I'm perfectly ready for them. Looking back on the last two years, I'd say this philosophy has served me quite well.

Ultimately, I just felt like I had to escape the oppressive blanket of Southern slowness that permeates all aspects of life down there

. I'm a Northern Virginia yuppy through and through, and will probably drive 70 miles an hour and live within five miles of a Costco for the rest of my life. Kathy will probably say that I'm bashing "the Hassee" if I end this post now, so here is a list of many of the good things I remember -- it's not all bad:

Another memory I have is arguing with a wasted composer in a parking lot for forty-five minutes before he let me drive his car back to his apartment, then sprinting a mile out of the unsafe ghetto to my place, past the homeless shelter and the streets with no lights. I don't think that's a good one though, just memorable.

Leave your spearguns and nunchakus out of your carry-on bag

Unleash the Chomp, rather, the Chang