Appropriate Use of Katrina for PR Purposes:

. I think this is a great use of the technology, though I hope the signal won't disappear whenever the aid workers go behind buildings. There's a spot on the Fairfax County Parkway where my XM radio fades out momentarily every day I drive by. I think it has something to do with top secret military grade sonar weapons. We'll know when the beached whales show up in the Potomac (real ones, not just fatty yuppy sunbathers). 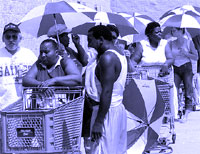 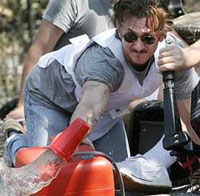 Celebrities of all stripes are donating millions of dollars -- even those celebrities who aren't yet washed up and in need of a publicity boost. When I become president of the United States after my good friend, Arnold, repeals the place of birth law, I will enact a "state of emergency" law. This law will say that any U.S. citizen earning more than one million dollars in a given year must forfeit all the money above that point to designated emergency funds whenever I declare a state of emergency. Money not used by the end of the emergency gets funneled into transportation projects around Virginia or presidential party funds. And trust me, there will be a lot of emergencies in my only term.

Inappropriate Use of Katrina for PR Purposes:

Senator Kennedy says that the aftermath of Katrina adds new questions to the efficacy of John Roberts Jr. as a Supreme Court nominee

. One event has absolutely nothing to do with the other. You can't just take a completely unrelated occurrence and use it to sensationalize or draw attention to your words, and people who do this obviously have nothing useful to say. Speaking of unrelated occurrences, I recently found undeniable proof supporting creationism, which I will share on my website sometime soon. Keep visiting and you could be the first to read about it. 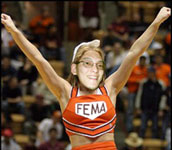 . Someone up high is obviously concerned with the wrong type of "damage control". It would be twice as effective if they sent the firefighters to Mississippi and employed real cheerleaders to paint FEMA in a good light. I, for one, would pay more attention to their "flyers", and FEMA is a short enough acronym for the average cheerleader to remember, and even spell on occasion. The picture on your right is BU disguised as a FEMA cheerleader, part of the ever-expanding collection which includes BU as Shoeless Joe Jackson, BU the Pimp, and BU the Loch Ness Monster. Collect them all!

The website, wire-sculpture.com, is having a Hurricane Katrina liquidation sale

. This is an appropriate place for the euphemism, "What the heck." That's about as shady as selling storm paraphernalia on eBay

. Especially bad are blog writers, like me, who talk about Katrina in hopes of generating more hits. It does work though -- the last time I talked about Katrina I had 20 comments and wrote three hits, "Baby's Love Done Gone", "Ooh ooh, la Do-wop Shop", and "Tickle". You are also welcome to donate to my personal Hurricane Katrina Relief Effort -- I only need a few more bucks to finish it: 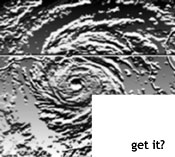 Thompson said neighborhood cats opened the fence in her back yard, enabling Crocus to escape.

Fired for eating the pizza

I was going to make a doorstop out of it. They owe me a cannonball.

Yesterday's search terms:
what are the symbolic message of the rooms found in charlie and the chocolate factory, when was the 2000th wendy's opened, new orleans sucks