Tallahassee Travelogue, Part I of II 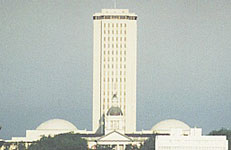 The city of Tallahassee, with its magical one-way streets and majestic phallic skylines, is almost exactly the same as when I left it two and a half years ago. The air is sticky and humid inside and out, and the buildings have an air of fungal decay, as if all city beautification projects get to 90% and then get cancelled. I only took three pictures while I was down there, and two of them were of Chompy -- I always take my camera everywhere I go, but then forget to actually whip it out and use it. Perhaps I should add "become better at whipping it out and using it" to my list of things to accomplish in October.

I left work early on Friday to finish packing, and then Anna came over to drive me to the airport. We watched the season premiere of Everybody Hates Chris before we left -- I had taped it the night before because I was busy watching Emily Rose and having deep theological discussions over chicken fingers. The show was pretty funny, and blends a lot of Chris Rock's stand-up comedy into the mix. I'll probably end up watching it often if Alias: Season Five, guest starring Ben Affleck's DNA turns out to suck in the same timeslot.

After an hour spent in security at Dulles airport, I boarded my flight to Atlanta. I had a seat right next to the big engines in the back, and the trip was uneventful until we hit some turbulence and the tail of the plane tore off and I ended up on a deserted island in the Atlantic Ocean. I may sell the story of my time on the island to ABC as a series called Lost: South Carolina. Every good show is a franchise nowadays.

Incidentally, someone did a Google search to this site yesterday for Lost and Michael Crichton's novel, Prey. If you watched the season finale of Lost last May, and you've read the novel, you'll understand what they must have been looking for -- it's an interesting theory to think that elements from that novel could have appeared in Lost. I could be less obtuse if I were sure that certain everyones had finished watching the first season.

On the flight from Atlanta to Tallahassee, the captain came on right before we left to say, "There's a problem in the engine we thought we could fix in twenty minutes, but twenty minutes have passed and it's not fixed yet", so we had to "de-plane" and run down the concourse to another plane. I suppose that's a better option than the captain saying, "We haven't fixed this problem but we're going to take off anyhow and see how far we get". This swap gave me plenty of exercise, since I went from Gate B38 to Gate B5 then back to Gate B44. If you've ever been to the airport in Atlanta, you'll understand how far this is -- I couldn't take the golf carts either because there were a disproportionate number of old people that had greater need than I did.

I arrived in Tallahassee about forty minutes late and had dinner at Applebee's with Mike and Kathy where I noted that Tallahasseans smell funny (Everything in Tallahassee smells a little funny, including the buildings, all of which seem to have been varnished in urine). After dinner, which was 11 PM, we went to Mike's (who lives at 222 Lake Ella Drive and whose phone number begins with 222-), where Kathy taught us a new board game, Settlers of Catan. It was fun despite its hex-grid war-game style look. It had a dark-skinned robber that lived in the desert, and you could trade wheat for sheep. The only problem was that she only owned the travel edition, and playing on it was akin to playing Risk on a napkin using boogers as army men. 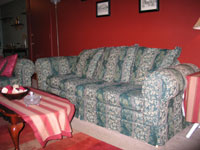 I slept at Kathy's rather than Mike's because Kathy's couch was 68% less likely to give me a communicable disease than Mike's futon / Chompy's bed. Her place was surprisingly well-decorated for a grad student's apartment, but I found out that this was because she lived with a real person who had a real job. Her roommate, Renée, had didgeridoos hanging on the wall and the complete Illustrated Pocket Classics set, which is a group of classic literary works in tiny abridged books with illustrations on every other page. Those books are the only reason I read any classic literature as a kid, and were better than Cliff Notes when I got to high school. They were probably donated to the library after I went to college, like my complete set of Choose Your Own Adventure Books.

Returning to the scene of the crime

'Bat' Is Truly a Blot on Man's Day