Sorry for the delay in posting this update -- I couldn't access my site from work (though everyone else didn't have any problems) so I had to wait until I got home. I felt rather helpless watching all you voracious readers visiting all day without any means to tell you why the world was frozen on Friday. Then when I finally got home, I realized that I'd left the final draft of the update at work, so I'm rewriting most of this from scratch. I often do forgetful things such as this.

My weekend was a success all around. On Saturday morning, my dad and I laid landscape timbers for the planter box and recoated the asphalt in the driveway. For Poker Night, I moved from 5th to 4th place, but still came in behind my new nemesis who somehow managed to take all my money in just two hands. I'm now circulating a petition outlawing the Full House as a valid poker hand, but so far, the only other signature is that of Bob Saget.

On Sunday I finally got around to buying new athletic shoes (a mere four months after putting that on my list of things to do), and stopped by Best Buy where I picked up a new CD, Weightlifting by the Trashcan Sinatras. If there's a Music Day this week, I'll review it then. Sunday evening, we all went out to Winchester to watch the Hokies play four quarters of touch-football and squeak by to victory. I didn't realize you could win a football game without tackling anyone successfully, but they sure showed me. The best part of the game was the fact that Michael Vick was on the sideline, compelling all the cameramen and announcers to get a reaction shot after every play, while mistakenly calling Marcus Vick "Michael" throughout. The game ended when Michael Vick left the stadium (since they focused on his entourage for several minutes while he ascended the bleachers), and then the teams kept playing for a few more minutes after that.

On Monday, I surprised the world by staying home from work -- this is a miraculous rarity on par with CNN newscasters who lose their cool

and Quentin Tarantino movies that don't suck. The three-day weekend closed with a nice dinner at Logan's in Fair Lakes. The mesquite chicken sandwich was good, but it sure doesn't beat a good old burger.

This news story made me laugh

. It's the quintessential example of the silly celebrity. If you are a rich celebrity and want to help the disaster victims, tossing a few million dollars around is much more effective than getting in a holed skiff with your personal photographer. If you want to make a personal contribution and/or you are stingy, make like Macy Gray and hand out supplies. Leave the rescue work to the trained professionals or maybe Harrison Ford in his helicopter. 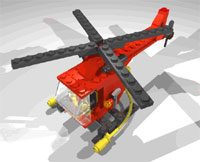 Speaking of helicopters, I like the term "helicopter parents", the name given to parents who continuously monitor and interfere in the lives of their college-age students

. I started college just as e-mail and cell phones were become mainstream, so I never had much firsthand experience with these types of parents. I e-mailed my own parents once or twice a week and I can count on one hand the number of times I actually called home for something while at Tech. You'd think that parents in this stage of their life would want to let go and party in Europe, rather than deal with the day-to-day minutia of their kids' education, but I guess sometimes you just can't let go.

Lost: Season One came out today. I plan on buying multiple copies and then infecting everyone within my sphere of influence with the creeping insidious addiction. Watch it -- it's better than Alias!

There's always an ex worse than yours