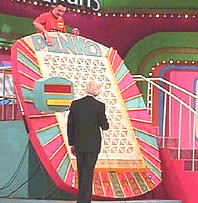 I gradually woke up this morning at 3:54 AM to what sounded like multiple ghost raccoons running back and forth over my head. I sleep in the back corner of my house so the roof is relatively close to my bed, but I do have an attic space, so I shouldn't be able to hear any small animals on the roof. I laid in bed for two or three minutes listening to the continuous pitter-patter of feet (which never abated for that whole time) before the ghost beasts ran to the corner of the roof. Then, it sounded like they all dived down the chimney -- as if Bob Barker had dropped seven or eight Plinko chips down the Plinko machine all at once. At that point, I got up and went to the window, half expecting something to be leering at me beyond the curtains, but nothing was amiss. After I went back to bed, I remembered that I have no chimney.

I'll have to remember to take a peek at the roof when I get home in broad daylight today. This was the first "odd" event at my house since I moved in over a year and a half ago. Maybe I unlocked the ghost box by talking about ghost cars yesterday. Or perhaps, it was just a highly personalized ad for CBS's new show, Ghost Whisperer where Jennifer Love Hewitt (and her "assets", which undoubtedly get top billing since they can probably act better than she can) play the role of a girl who sees dead people and must try to help them. This is a highly original show which has never been done before

. Here are some other highly original shows appearing on primetime TV this month:

Surface:
A bizarre new sea creature is discovered and four people react to it in different ways. You don't actually get to see the creature. NBC's version of Lost.

Just Legal:
19-year-old legal prodigy teams up with alcoholic lawyer for hilarious hijinks. The WB's The Practice. I thought the actor playing the 19-year-old (Jay Baruchel) was funny in Undeclared, FOX's college comedy that was prematurely canned like all of their shows are.

Out of Practice:
Psychologist with two doctor parents and a plastic surgeon brother get involved in family hijinks. CBS's ER meets Alias, perhaps?

E-Ring:
Pentagon-based military story about some sort of urgent situation. NBC's version of 24 meets West Wing and also their Emmy submission for Worst Title Ever.

Invasion:
Hurricane strikes Florida, but maybe it was caused by aliens! ABC's version of X-Files meets Lost, except they already have a Lost!

Inconceivable:
Three doctors work at a fertility clinic with hilarious hijinks. NBC's entry in the "We're putting this on Friday night so we don't have to move it to Friday night when it tanks" category.

Last night's premiere of Arrested Development was very funny -- I'm surprised at how good the writers are at devising storylines that tie all the characters together in the ending, even two seasons later. It's like Seinfeld, but funny and not annoying. Kitchen Confidential was pretty flat and won't last long. Bradley Cooper turned in a good performance though.

Now that one of the desperate housewives has won an Emmy, how long before there's a massive catfight on the set and they all end up in the hospital?

When I first saw it, I saw the big U, and I had to back up just to see if that's what it really said

A Czech town has built a $1800 bridge to protect a handful of squirrels from a busy road, but do not know if they will use it