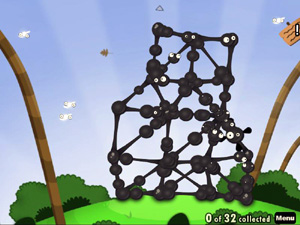 World of Goo is one of those games with a ridiculously simple conceit that ends up sucking you in and being more challenging than you thought possible. This is the kind of game you might stumble upon at work as a Flash applet and waste the remainder of your afternoon trying to solve (Be forewarned, Fantastic Contraption addicts).

The goal of each puzzle is to build a tower of goo balls to a suction pipe in the sky (a certain number of goo balls must enter the pipe to pass the level). You can pick up a goo ball and drop it anywhere on the screen -- if it's close enough to other goo balls, a sticky little network is formed. However, the goo balls obey the laws of physics, so placing too many on one side of your creation will see it topple over before you can reach the pipe. 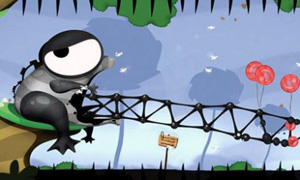 The difficulty level starts out simple, but gradually introduces new types of goo balls, such as balloons that give your structure a little extra upward mobility, and adhesive goo balls that stick to walls. In the level on the right, the exit pipe is on the far side of a spike-filled tunnel -- you must balance out your use of balloons and normal goo so you don't go too high or low. 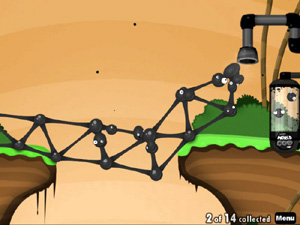 This might sound frustrating, but you can take a step back in time at any point during the game by touching one of the white bugs flying around the screen. This design decision encourages experimentation, and allows you to reduce frustration by seeing what happens when you let your goo balls fall into the rotating saw blades (see also, the Mass Self Destruct button in the old Lemmings game).

It helps that the entire game is perfectly polished. As a $15 WiiWare download-only game, I was surprised at how professional the game appeared (it's also available for PC, but the Wii Remote is perfect for it). Levels have a consistent art style and the music is catchy without being obnoxious.

Frozen poop flavor not a hit