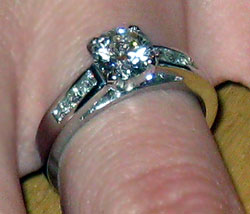 ♠ Traffic has spiked incredibly this week, probably due to the casually dropped news of my engagement. Surprisingly, I got more traffic from the engagement than I did when I posted the link to the nearly nude cheerleaders in Idaho -- I guess monogamy is not 100% dead yet. Here's another picture of the ring, since it should be worth about 25 female visits today.

♠ Now that I've won the marriage primary, I suppose I should campaign to get the relationship accepted by the general public. I promise free kittens, Guinness, and those leftover wedding coozies that Rebecca found at work with "To Have and To Hold and To Keep Your Beer Cold" printed on them to anyone who will endorse my wedding.

♠ I find it humourous that these coozies were printed up and then returned for some long-forgotten wedding. I can just picture the groom ordering them as a surprise for his wife-to-be before becoming crestfallen at the fact that they don't really gel with the theme of "Disney Princess Weddings".

♠ I actually knew a girl named Hilda from high school who had a Disney-themed marriage. She also worked at the Disney Store for several years, so perhaps those are the benefits they got instead of health coverage. I did not attend the wedding, so no word on whether Goofy officiated.

♠ Now that we have officially announced our engagement by changing our Facebook status to "Engaged", I am bombarded with wedding ads like a London flat during World War II (if London had been subjugated by The Knot). I suppose that ads telling me I should lose 20 pounds before I get fitted for a tux are better than the ads that Facebook used to have that tried to convince me that my Mom lived in SimCity.

♠ I never really enjoyed SimCity because it was impossible to build a normal true-to-life city. I would usually just enter the cheat code to get a billion dollars and then lay out a strict grid of railroad tracks and police stations. I never understood why those silly Sims would rather live next to the pollution-less railroad tracks instead of a road. Riding the train was fun in Europe because stops were everywhere. In an American version of SimCity, you'd only be able to get on and off in Lorton and Florida, and you'd need roads at both ends to drive your car out of the auto-train (and the engineer would be busy text-messaging).

♠ Speaking of auto-trains and Disney, the first time I took the auto-train was with my parents after my sophomore year of high school, when we visited Disney World for a week. I clenched my jaw while I slept, and the next morning all of my front teeth were shaken loose and painful from the train vibrations. I had to eat cream cheese out of a packet for breakfast because I couldn't chew anything. The second time I took the auto-train was when I moved to Florida for grad school in 2001.

♠ It's now been seven years since I started grad school. There's no good point to mentioning this again other than to tell Kathy to finish writing her dissertation already. I suppose I could threaten her cats -- it worked for Mike (of Mike and Chompy) when he was writing his thesis in 2003.

♠ Writing theses as a composition student is probably easier than writing feces -- you create a musical work, send the score to a bunch of professors that are already thrilled with you, show up for the defense and walk out ten minutes later as a Master (hopefully Of The Universe).

♠ This weekend, the plan is to start preparations for the upcoming Halloween extravaganza, study for Java Certification (three chapters, seriously!), visit some of Rebecca's relatives, and meet at the DC pad of Mike (of Mike and Chompy) for an all-night birthday celebration before heading to work on Columbus Day.

Angry about the economy? Smash some plates and move on