fortified with nutella and verbs

♠ The neighbour's new dog was outside barking at 3 AM this morning with one of those annoying alto clef frequencies that are impossible to tune out (no doubt it would go well in a symphony orchestra). This pain in the neck was accompanied by a more physical variety. Having slept on it wrong a couple nights ago, I can now only turn my head about ten degrees in any direction (that's 0.18 radians for Math majors). 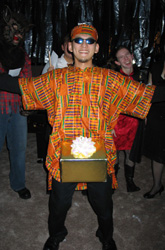 ♠ If this neck pain had come ne(ck)xt week, I could have just stuck a few bolts in my neck and been Frankenstein for Halloween. Unfortunately, it's still a little bit early to be dusting off the costumes. This year, I will not be reprising my role as Justin Timberlake, or any sort of Internet meme although the Dramatic Chipmunk would be tons of fun if I had one of those fast-rewind press tape recorders. I still never had a chance to use the late-delivered ukelele from 2005.

♠ The annual BU-hosted Halloween Party is coming up next weekend, on the same day that Anna turns 27, Booty turns 6, Amber turns 4. The age of the partygoers continues its inexorable upward creep, made obvious by the presence of wine on the shopping list and the insane number of pregnant non-drinkers expected to attend. Evidently all parents on the guest list interpreted "baby-free" as "baby-free unless they are inside your metaphorical oven".

♠ International Airports would make a fortune if they expanded their Duty Free zones with Baby Free zones (where you can boink all afternoon long while waiting for your flight and not have to worry about incurring any hidden babies). And if you already had a kid and weren't interested in the boinking, you could go to the Doody Free zone, where your child is guaranteed not to poop until you leave.

♠ My plans for the weekend involve some heavy-duty shopping, some heavy doody, and some high-octane studying. I'm hoping to sign up for the Java Certification exam in the next couple weeks so I don't have to worry about it through the holiday season. On Sunday, we're going down to the Apple Festival in Syria, Virginia, which might be rather peculiar, since I am now allergic to apples.