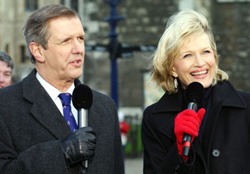 When I was growing up, my parents had a staggered workday schedule. My dad would be on the 6:10 bus to the Pentagon Metro station and at his desk by 7 AM, which got him home in just enough time to catch the tail end of Duck Tales (though he never took advantage of this scheduling perk). My mom followed a more traditional rush hour timetable, where she drank coffee and watched the fake-smiled anchors on Good Morning, America!. As a result, she generally left the house around 7:30, and didn't get home until 7 PM or later.

Since my dad was the primary caretaker in the evenings, the responsibility for feeding us was his and his alone. Weeknight dinners could be classified into various phylums and classes, but originated from two major food kingdoms: Foods You Cook in the Microwave, and Foods You Boil in a Pot. In those six or seven years before we could be trusted to make our own dinners, we saw boiled hot dogs, fried chicken, fish sticks with tartar sauce, TV dinners, and more boiled hot dogs, coupled with some frozen vegetables boiled in a pot.

The best nights for me were fried chicken nights, and the worst were the weeks when chicken hot dogs were on sale. Boiled hot dogs of any kind are barely edible, but the taste of a chicken hot dog (which probably had 0.01% chicken anyhow) was palpably noxious ("It tastes like FEET!") 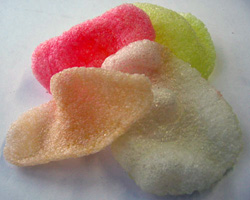 It was always a relief to survive to Saturday without contracting any sort of avian flu from the chickendogs, because Saturday night was delivery/restaurant night. It was here that I got hooked on Pizza Hut Pan-style pizza and wonton soup while watching all sorts of rated-R grown-up movies with the family. When the Erol's video store ran out of worthwhile movies, we'd take trips to the Chesapeake Bay Seafood House, or Shakey's (a middle-class man's Shoney's), or the local Chinese eatery under the bowling alley by Hammond, which served the shrimp chips that stuck to your tongue and flaming ice cream.

To prove that the nuclear family was still alive and well, Sunday night was always Family Dinner night, where the mom figure dutifully cooked a three-course meal, the dad figure painstakingly picked out a CD of tuba music to listen to, and the kids complained about the lack of edibility or taste in whatever was made (unless it was spaghetti). At the end of the meal, we would sit back and talk about the previous week and then have a round of "Good Things, Bad Things".

The rules for "Good Things, Bad Things" are simple: each family member nominates a highlight from the past week and also a low point. After nominations, the family votes (hands are sufficient and more secure than electronic ballots).

Iranians eat world's largest sandwich before it can be measured

Who made your dinners as a kid?