Scouts to get advice on safe sex

The Scouts, the youth movement best known for its focus on bracing outdoor activities such as camping, hiking and fishing, is to arm its teenage members with practical advice about sex.

Advocates of the decision see this as a logical extension of existing Scout activities, noting that if you don't brace yourself while boinking out of doors, someone's going to have a very unfortunate head first fall into a latrine.

The movement, whose motto is Be Prepared, has issued new guidelines aimed at Explorer scouts between 14 and 18 in a bid to help them better understand some of the realities about sexual relationships.

(330KB MP3). Along with campfire ditties like Two Half Hitch Bondage and Orienteering Your Front to Her Back, he will also reprise his classic STD hit, I Got It From Agnes. 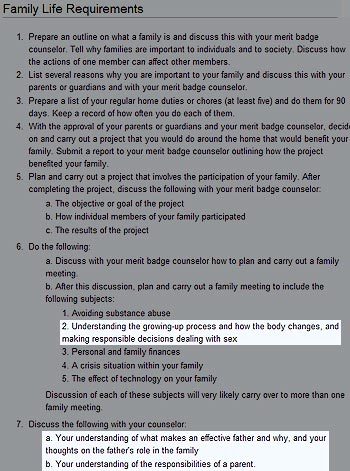 The Scouting Association [. . .] says the main aim is for leaders to encourage young people "to resist pressure to have early sex". But, acknowledging that many youngsters are already sexually active from the age of 16 and younger, the movement is hoping to provide help and support to enable teenagers make safe and informed choices.

A similar sexual awareness program was attempted by the Boy Scouts of America, but the final version was a watered-down "Family Life" merit badge, where sexuality was reduced to a single bullet point and given equal importance with "the effect of technology on the family".

One BSA spokesman acknowledged the uselessness of the badge: "We were worried that the Patrols would want to practice their sexual activity on camping trips, and that would mean we'd have to let girls into the Troops if we wanted to avoid all the homosexualishness." It is common knowledge that gays are part of the BSA Axis of Evil, on par with athiests and Girl Scouts whose parents sue over gender equality.

The advice even allows for Scout leaders to arrange a visit to a sexual health clinic or to hand out condoms if they believed a youngster was "very likely to begin or continue having intercourse" without protection. Chief Scout Peter Duncan said: "We must be realistic and accept that around a third of young people are sexually active before 16 and many more start relationships at 16 and 17.

Trips to the red-light district are also part of the curriculum for these randy scouse gits. Scoutmasters use everyday working girls to familiarize scouts with the difference between the Thrupenny Bits and the Elizabeth Regina, and which parts might pass diseases to their Three Card Tricks. Scout leaders also play the popular Internet game which involves replacing the word "wand" with "wang" in various Harry Potter texts and explaining why Hermione is not for humping.

Mila Kunis plays WoW and has a twink

Horse gets head stuck in tree

TV Guide sold for a buck