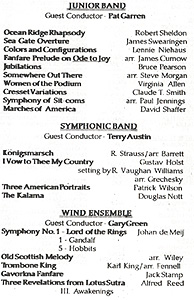 All-District Band is like the Pro-Bowl for band members, but without any hopes of making millions of dollars or getting on a Wheaties box. Every year, hopeful band geeks from an arbitrarily drawn district (which were obviously gerrymandered to favor schools that actually cared about music education) would line up for a five minute audition that would make or break their all-star ambitions.

The auditions were done blind by members of the nearest military band, who needed that extra $20 paycheck to make the monthly payment on their eight million dollar flute which they purchased before realizing that music, like crime, doesn't pay. One by one, the judges (properly hidden behind a chalkboard draped in a quilt sewn and donated by the alpha band mom) would ask for a couple major scales, a two octave chromatic scale, and then a musical excerpt with all its identifying information blacked out (but which always seemed to come from a Voxman duet book).

You could get immediate feedback on how horrible you were based on how much of the excerpt they asked you to play -- when it was obvious that you weren't Pro-Band material, you'd be asked to play two or three bars, but the virtuosos would get to play the entire selection. Evidently the judges needed to hear a few minutes of beauty every hour to stave off the madness caused by a tsunami of musical detritus from uninterested students who thought a minor scale was one played sadly, and who only showed up because it was required by their band directors. 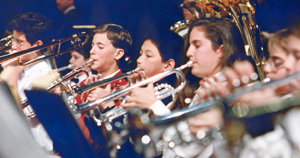 If you actually made it through the audition and landed a spot in the gig, you got to spend an entire three-day weekend circling (and peeing on) the other local talent to establish an order of dominance -- the first chair player had to prove that his 0.2 extra audition points were justified, while the next four chairs waited to pounce on that first cracked note in the solo which might prove to them that the judges were wrong and they deserved to be doing the solos. Alternately, you could squeeze into the bottom of the section as LAST CHAIR and avoid the drama altogether while playing all the notes in the chords that aren't really noticed if they go missing (see also, the tenor sax part and the entire second violin section).

The above picture was taken from the 1992 All-District Junior Band, where I successfully landed the prime "12th chair out of 12" spot as an eighth grader (Steve Seltz is in spot #10 on my left). I got to skip school on a Friday and didn't even suffer the ignominy of being last chair, since Dutton Hauhart (on my right) sat in as First Alternate after some trumpeter higher up on the food chain called in sick. 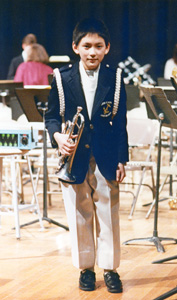 In fact, there were only two downsides to that year of All-Districts (besides having to play more Jim Swearingen music) -- one was the fact that every guest conductor seemed to have some sort of woodwind background and insisted on picking songs where the trumpets slept for ninety-two bars and then played a half note. Had I wanted this experience, I would have joined an orchestra.

The other downside was the concert uniform. Rather than the obvious idea of wearing black and white, we were told to show up in our school's band uniform. Coming from a school whose mascot was the F.C. Hammond Admirals, I was the sole band member to show up dressed as some macabre parody of a sailor, as if the cast of Today's Special had picked out a navy prop from the It's A Small World ride and brought it to life.

This choice of wardrobe did not impress the ladies.