the crazy glue of Internet society

♠ I've read over 1300 pages of Java Certification texts in the past month, and am now ready to take the next test in the series identified by a jumble of too many letters (at 10 AM this morning). In order to pass, I have to get 49 out of 69 questions correct, which is an obscenely low 71%. Of course, it's only obscenely low until I fail with a 70.5%.

♠ Speaking of easy grading, there's a drive to dumb down the grading system afoot in Loudoun County. They want to lower the A threshold from 93 to 90 so everyone can be an equal-opportunity dumb smart kid. In my day, 94 was an A- and 95 was an A and I was still able to win the "free bowling" pass for being on the Honor Roll.

♠ Free bowling used to be the ultimate reason to get good grades. There was a bowling alley right across the street from my junior high school, and having straight (green grocer) A's meant that you could get free shoe rentals and then bowl for 99 cents per round. This early association between bowling and academics eventually faded (I haven't bowled in two and a half years), although I still get hungry for personal pan pizzas after I read a book.

♠ I hated reading the Head First Java book, though, because it seemed to feel that 900 pages of bad jokes was a necessity for learning (and it turned out that the 300 page concise book I purchased was for an older version of the exam). I don't honestly need a cartoon of screen caps from kung fu movies to understand what the Decorator pattern is in software development. 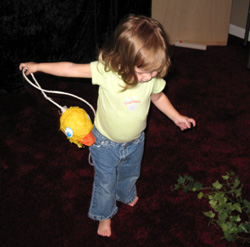 ♠ Decorations for this weekend's annual Halloween party have been in full swing, and even Ella has gotten into the spirit of the holiday by dressing as a "zombie kid with a duck head". Building on the decorations from last years' party, this expansive party will eventually cover two city blocks and take up to one and a half years to setup. 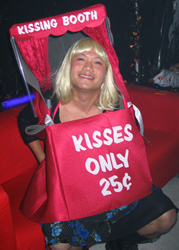 ♠ This year's party will also feature a guest appearance from Vu (Winner - Best Costume Overall 2005) who has been hiding in San Francisco for the past three years, but happens to be in town this weekend. The only thing funnier than his costume was the look on his face when a drunk guy started hitting on him.

♠ Plans for the weekend include the aforementioned Halloween Party, as well as the obligatory clean-up session, where I throw out any burned or extinguisher-foam-covered furniture and replace all the broken window panes. We'll also be heading down to Centreville to learn some new poker games at Kathy & Chris' house.

♠ Saturday is also Anna's birthday, Booty's birthday, and Amber's birthday. Happy Birthday to all! These cats are 27, 6, and 4, respectively, and will be receiving a special variety bag of catnip in the mail.

Blind Ohio marching band to be in the Rose Bowl