♠ Being the 8th of August, today is a mildly awesome day, because 8/8/08 is like having four 222s, and everyone knows that quads beat a three of a kind.

♠ In last week's impromptu midweek poker game, quads never showed up for me (except when I stood up in a muscular fashion). The game was won handily by Dissertation-Kathy, with Florida-Mike and Theory-Chris as runner-ups. The fact that we played with the oddball Florida rules is suspect, since all three winners had played with them before.

♠ The first rule had us deal all the chips out of the box. There were so many on the table that we might as well have been playing with horribly inflated Sri Lankan rupees. Blinds also went up at set time intervals, which eliminated any opportunities for dicking around. In Virginia rules, 55% of strategy involves dicking around.

♠ After writing the previous fragment, I got curious about the etymology of the phrase "dicking around". It wasn't in the Dic(k)tionary, so Google sent me to the entry for Dick in the Wiktionary (which may have also been a slang phrase from a 90s rap song). Apparently "dick" is also used in relation to Cumbrian sheep counting -- how apropos. 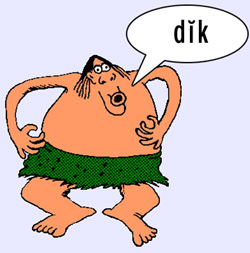 ♠ The above site gets points for asking the reader to go see "WikiSaurus:penis" (which probably involves renting Jurassic Park on DVD), and almost got points for having audio samples of people pronouncing the word, but they're all in OGG format. I presume this means that a caveman named Ogg is narrating, which kind of defeats the purpose of having a crisp pronunciation guide -- everyone knows that cavemen "suck dick" at dic(k)tion. Incidentally, I haven't used this many parenthetical Ks since the last time I wrote about my retirement plan.

♠ I actually know what the OGG format is, but I'm one of those fossils that still keeps all his music in 128kb MP3 format and, as such, don't have an OGG Player. There are people that will argue that 256kb offers much better sound quality, but I don't really mind the difference. Plus I find it inconceivable that Gwen Stefani is allotted over 8 megabytes to spell the word BANANA. And in some cases (notably student recitals), degrading the quality of the MP3 actually covers up the worst of the performance blemishes. Other recitals are so horrible that you couldn't cover them up with a lifesize map of the world. 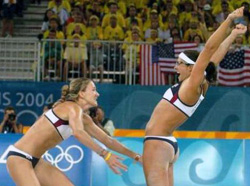 ♠ There are no big plans for the coming weekend -- a little bit of certification studying and some lawn mowing are likely. I might also go biking on Sunday if the spirit moves me. The Olympics are starting today so maybe I'll also take some time to watch the figure skating beach volleyball.

♠ I'm not exactly sure what distinguishes Olympic beach volleyball from regular volleyball other than the uniforms. I would like to see other forms added to the Olympics, such as swamp volleyball, liquid hot magma volleyball, and valley volleyball.

PETA dares the Beef Queen to wrestle the Lettuce Lady