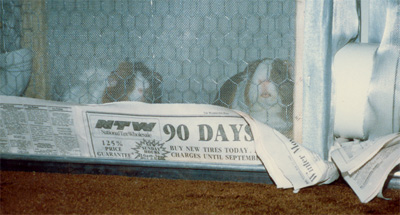 It was in the Spring of either fifth or sixth grade when the next animals entered the URI! household menagerie. This time, instead of a peeing kitty, it was a pair of fluffy guinea pigs.

Although we didn't realize it at the time, guinea pigs are easily some of the most worthless pets in the history of pets. Now, many pets don't have much to offer to the human race -- snakes spend the entire day sitting stock still on a stick, stoically staring. However, guinea pigs are equally worthless and annoying to boot.

Guinea pigs are larger than a mouse but smaller than a rat, poop and pee eighteen thousand times a day, refuse to be picked up or petted, and make an air raid BWEEEEP sound whenever they're hungry. They eat constantly and grow to the size of a mutant potato -- as they expand, their proclivities for pooping and peeing increase in a linear fashion.

My sister's piggy was named Speedy, a sleek white, tan, and brown beast that looked like the failed design for an African flag. My own, Pokey, was whorled in cowlicks and looked slightly like a partially gnawed albino apple. We kept them in a homemade cage of PVC pipe, wire screen and metal trays covered in newspapers. 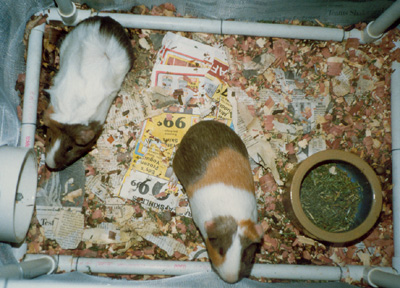 From the day we got them, they ran from us at every opportunity -- all the silly Guinea Pig books from the local Crown Books suggested that continued petting and holding would tame them, but all it did was result in further poop and pee in the unfortunate petter's lap. Continued attempts to lap-train them failed, and eventually we reached a point of mutual coexistence -- we would feed them fifteen times a day and clean their cages every time they smelled like a urinal trough, and they would not go BWEEP BWEEP BWEEP.

Eventually, they grew to a size where their cage was always a soggy pastiche of piggy pellets and sprayed urine, requiring a daily cleaning to keep the smell down. Cleaning was an arduous affair, requiring us to chase them into one half of the two-trayed cage while we swapped out the newspaper in the other half.

Of course, kids in fifth and seventh grade are not going to keep up with a daily task like this -- we could barely remember to practice our instruments for thirty minutes a day without constant nagging. So eventually, my valiant dad became the constant gardener of these unpleasant beasts.

It all came to an end one day when we returned home from school to find the space where the cage once was vacuumed and empty. When asked where they had gone, my dad simply said that he'd gotten tired of the BWEEEEPing and found them a new home.

No one was particularly brokenhearted.

Payroll computers too old for a pay cut

No kids or jobs for stay-at-home wives