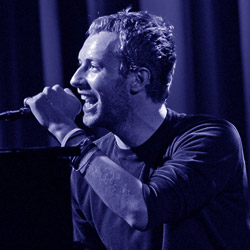 On Friday, XM Radio finally ended its ridiculous musical experiment, "Thirty Days of Coldplay", during which Channel Crazy-European-Techno-Music was replaced by Channel Soft-Rock-Coldplay-All-Hours-Of-The-Day. Doing the math, there are 720 hours of airtime to be filled with Coldplay's entire discography which (according to Allmusic.com) amounts to about 60 songs.

At four minutes per song (five in the ones that employ the typical soft-rock vamp which almost puts them in the trance genre), there's guaranteed to be a bit of dead air. Some gaps are filled with inane commentary, such as the drummer's insistence that one song was too hard rock to be appreciated by the audience before performing a song that would almost be at home on the piano of John Tesh. Other gaps are filled with live versions of songs which generally involve the audience singing Fix You as an atonal Schoenberg aria.

Although Coldplay has been trying to build a better U2 since 2000, I didn't hear of them until April 2003, when I embarked upon my grand experiment to listen to more popular music. Before that time, my musical portfolio consisted of a wide variety of classical and jazz with a hint of Dave Matthews and a dash of Eminem. I was actually a big fan of Coldplay back when I first heard them -- the sound was fresh and their videos were artsy in a half-retarded way. Two CDs later though, their music was relegated to the "background" file and their wearisome oversaturation of the airwaves was like enduring election season all year 'round.

Thirty days is a long time in any event, and it seems to me that NO band is worth having a radio station devoted to them for that entire time. What bands could you listen to for an entire month at a time?

The agent did say that the buyer agreed to pay the full list price of $1, and planned to pay cash.

'Jenkem': Stay Alert or Call It a Hoax?

How long can you listen to Coldplay without changing the station?