Back in my high school Crew days, I was the coxswain for the Lightweight boat. As in most weight-restricted sports, the Lightweight bracket started out as a way for Lilliputians to compete against each other, but ended up as a just another abusable system where coaches tried to stack the fat without exceeding the upper limit.

On the men's Lightweight boat, there were two weight restrictions: no single rower could be over 145 pounds, and the entire boat's average had to be less than 140. In our case, we regularly had two rowers near the 145-mark, with our bell curve average softened by Ian Schmidt's 132 pound frame. Coxswains are not allowed to be included in the average, because fat coxswains don't steer any differently from skinny ones (although my 108 pound self would have been a boon). Female lightweights had it even worse, with a maximum limit of 120 pounds (as if teenage girls aren't already obsessing enough about their weight).

Besides the usual effective tactics of employing various eating disorders for profit, there were a few other common ways to get your weight down for the pre-race weigh-in, where hundreds of emaciated Lightweights gathered around a cattle scale to hear the Decree of the Fat. A quick hit of laxatives generally did the trick, although this could backfire during the race itself. Another option was sweat runs, where people would put on as many layers of clothing as possible (sometimes including a layer of garbage bags) and then run a couple miles around the weigh station. On the girls' side, every third or fourth rower in line to be weighed could be seen spitting in a cup, as if the weight of the saliva would have anything more than a placebo effect. 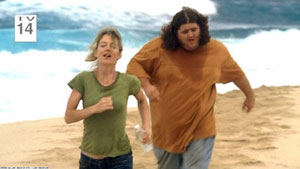 Despite our boat's collective blubber, there was only one race when we failed to make weigh-in -- at the Stotesbury regatta in 1996, the rowers some how managed to have 9 pounds to shed (probably attributable to the fact that we ate at McDonald's and Bob's Big Boy for the two previous meals). A two mile sweat run up the Rocky stairs in Philadelphia cured our weigh-woes, and the judges allowed us to compete with an average of 140.05. However, we may as well have sat on the shore for the comedy of errors that followed, as outlined in one of my historic journal entries:

"Our goal was to hang on to St. Joe's who had come in second timewise to LaSalle and were 8 seconds ahead of us in heats. We were actually doing quite well in the beginning. We edged out TJ and started to move up into 3rd. Then Ben caught a crab with his oar for about 10 seconds, dropping us back down to 6th. Then I called a spurt but Travis didn't hear. He went for a full stroke and hit Charlie in the back. Charlie was then off of his seat for the last 600 yards or so. Even so, we came in 5th and beat Yorktown."

There's no real moral to this story other than to note that Yorktown lost to a boat with two incapacitated rowers. They must have had one too many laxatives.

Put the pretty one out front