There seems to be a recent makeover frenzy surrounding classic board games deemed too slow-paced or spiffy for modern audiences. The latest casualty of this is everyone's favourite game, Clue. From the cosmetic side, the staid British guests are replaced with a movie star and a football player among others, while the lead pipe has been dropped for the equally logical "set of dumbbells" (which is apparently easier to find in a spa or a home theatre).

Because kids today have the attention spans of fruit flies with cancer, Clue is now shorter, with the guests having special superhero powers to help solve the murder faster. Other cards have the possibility of eliminating players as suspects completely.

This isn't the first childhood memory obliterated by the board game industry. Life introduced mid-life crises, shattering my deeply-ingrained understanding that the only way to succeed in the world was to be a doctor (being a teacher would leave you broke on the side of the road with four pink pegs in the station wagon). Monopoly eliminated cash, training youngsters that all purchases should be made with a credit card on a minimum balance.

At this rate, it won't be long before every game has been updated for the 21st century. Here are a few others we'll probably get before long: 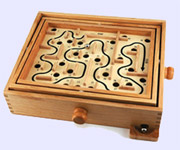 Jack Mustard In the Spa With the Ax

Computer humans take the next step