fast-acting relief from the pains of coherency 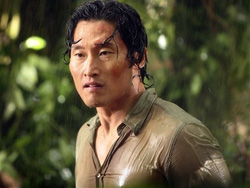 ♠ The actor that plays Jin on LOST was arrested for suspicion of drunk driving last night, so I guess they're going to kill him off next season. LOST has always been MADD's moral compass, since the three other actors who had major traffic violations were all killed off in the long run (I can't mention names since Rebecca's not caught up yet!).

♠ They recently got Jack Bauer again for drunk driving, but somehow I bet that 24 would not maintain its trajectory to syndication if they killed HIM off. Alternately, they would write the scene where Jack finally dies, and on every take, Kiefer Sutherland would come up with a new meta-way to avoid the death. The seventh season would end with him turning into an invincible superhero and flying away, while giving the finger to the director.

♠ I finished watching the first season of Heroes before I went to Blacksburg and found it enjoyable but not addictive. I didn't like how they occasionally refilmed particular scenes with slightly different details -- nearly ten minutes of the season finale was recap material. I was also highly let down by the ending. Obviously the special effects budget had vanished to pay for that exploding house midseason.

♠ With the most recent batch of shows on DVD complete, I'm done with TV for awhile until the next seasons of Scrubs and Veronica Mars come out. This is just as well since my schedule is going to be jam-packed for several weeks. This past week, I spent evenings from 5 to 7 in a free training session offered by my company. As a sly tactic by HR, the training was described as free and completely voluntary, but to get out of it, you had to email one of the founders of the company directly with a "I Will Not Attend" RSVP. This seems to be a rather explosive way to further your career, in my opinion.

♠ When not training or working in the basement, I've been frantically reading through Janny Wurts' Light and Shadows series so I'm caught up when the next book comes out next week (according to the British cover, the book will be called Janny Wurts by Stormed Fortress). As Anna mused, this series is like my "Harry Potter".

. Part 3 has been published in incomplete sections since 1997 (because the entire book is too large to fit in a single binding) so after three thousand pages of unresolved threads and plots, I can't wait to devour the finale. I can't even imagine the willpower and determination it would take to write a book, knowing that it wouldn't be done for ten years -- I can barely update this web page on time every day.

♠ If my updates are ever particularly late, you can also take comfort in the blogs linked on the left sidebar, including the new one by KATHY (of Kathy and Chris). Together, all of us bloggers can ensure that we live in a world where someone, anyone, has updated the next time you're bored at work.

♠ This weekend will be filled with some hardcore Halloween partying, as well as a trip into DC to see "25th Annual Putnam County Spelling Bee" at the National Theatre. Then I'll recuperate from all the Halloweening and start planning for the Month of Thanksgivings!

♠ Happy Birthday to Jaspreet Singh! Have a great weekend, everyone!

Barmaid crushed cans with her breasts