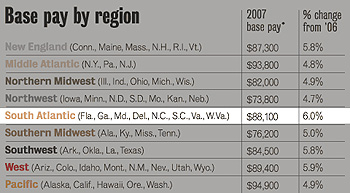 A storm seems to be brewing in the IT job market. Pay raises have continued to outpace inflation, and bonuses are downright impressive - 11.6% on average. Yet, as the 2007 Network World Salary Survey finds, dissatisfaction over the salary package is rampant.

Based on the results of this survey, I'm guessing that I'm not a typical IT worker in the United States. Sure there are some minor annoyances in my job, and I wouldn't kick a bigger salary out of bed, but at the end of the day, I'm pretty happy with my package (and I've heard that the ladies are too, but that is a topic for another day -- in fact it might even span multiple days. ROWR!) 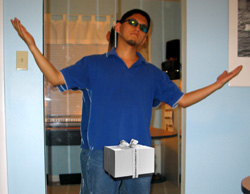 Being a software engineer is a wonderful career for people with the right mindsets and skills. Every day I get to work towards a tangible goal by being creative, solving problems, and tracking down hard-to-find bugs. At the end of a development cycle, I have a product I can point to (hopefully with pride) that serves as a visible reminder of my efforts, and on top of that I get a decent salary to boot.

Take a look at the salary chart in the upper right. Even though it costs a million dollars to live in the city nowadays and Popeyes has raised the cost of their two-piece meal from $4.36 to $4.68 while shrinking the size of the chickens by 10% (my lawsuit is in the works), those are decent salaries for what we do. Sure, the numbers for Kansas are a little low, but that's offset by the fact that you can get a spaghetti diner meal and a shoe shine for a nickel, and you'll never worry about spending money on entertainment because there's NOTHING TO DO THERE.

For the amount I'm paid, I get to mosey into the office whenever I feel like it dressed however I want -- an office where the worst catastrophe might be a spoiled lunch in the refrigerator that's been broken for three weeks, or getting bored to death by Mr. Talky around the corner. For those inconveniences, I should be thankful that the pay is so high -- it's not like we're emptying garbage cans, transporting medical waste to be dumped on the beaches of New Jersey, or battling insurgents in the seedy back alleys of Old Town Alexandria. When you compare our situation with any other profession, how could anyone have the nerve to complain? And apparently, the benefits are nice too -- far nicer than I presumed:

These numbers are a bit misleading since we all know that there are only two total women in the entire IT profession, which means that one woman has not kissed any coworkers, while the other one is a total slut (but is also ashamed of it -- wouldn't you be ashamed to smooch a CS major?). Personally, I've never snoozed at work, but that's just because snoozing is so much more comfortable at home, so working straight through the day means I get home for the snooze that much faster. I have started nodding off before, generally during four-hour meetings, but that's usually just a good time to hit the bathroom or scout out the kitchens on every floor in search of leftover pizza. Sure, it's usually crappy Papa John's garbage, but free is free. And, unlike 25% of IT professionals, I've never boozed on the job either, though I have worked on critical code for the United States government following a dinner with wine. 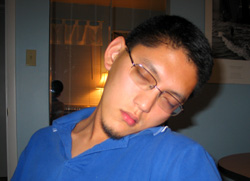 This is fine though, because if one of our missiles ever hits Kansas, the state's population will welcome the diversion from perpetual boredom, and I can blame it on the coworker that was smooching and snoozing on the job.

Video games cracking down on cheating