Out of Ideas Day 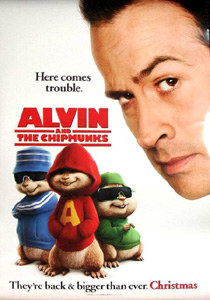 Don't worry, I'm not out of ideas, because as a last resort I can always string some vaguely rhyming words together and suffix them with DAY (see also, Museday Tuesday, Newsday Tuesday, Manic Monday, and Dave Day).

It's actually Hollywood that's out of ideas, something that's been painfully obvious every since they released The Second To Last Karate Kid and Bewitched. The most recent example of OOI Syndrome (pronounced OO-wee) is the Alvin and the Chipmunks movie coming out in December.

, which in turn was based on a silly novelty record from the 60s

, which was based on the weak gimmick of playing a recording twice as fast to sound like a chipmunk. This, to me, is like figuring that the bassoon has kind of a funny sound to it, deciding that it would be a good idea to write a twenty-minute concerto for one, and then actually getting it performed in public. 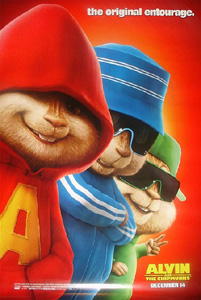 Of course, it's never good enough for Hollywood to bring nostalgia back without "updating" it for the current generation, so for this movie, apparently Alvin, Simon, and Theodore are now 80s rappers and Jason Lee (of My Name is Earl and Kevin Smith fame) has pimped himself out to the highest bidder in the "I would expect Tim Allen to play this part" role of David Seville.

I'm not sure what the plot of this movie will be like, but judging from the official movie trailer

, it will involve chipmunks pooping and other chipmunks eating it. Always hilarious. It might actually be a step up from the cartoons, where the chipmunks got into ridiculous scrapes which allowed them to sing songs like Creedence Clearwater Revival's Proud Mary over a chase scene of some kind. The fact that I watched it at all was probably just because DuckTales, a superior cartoon in every way, followed immediately afterwards.

Wouldn't it be great to live at the mall?