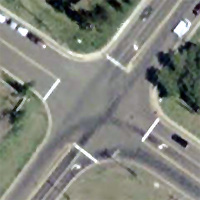 The intersection of Church Road and Sugarland Run is a nondescript residential intersection whose most exciting feature is a four-way Stop sign. On the road running from lower left to upper right in the picture, there are small concrete medians between lanes intended to help drunk drivers and the British to stay in their proper lanes. That, at least, was the theory behind installing them, but not a month would go by without some left-turner blowing out a tire or crushing the concrete edges of the median.

The next step was to add a universally-understood sign to each island (which either means "Stay to the right of the median" or "lean right to avoid codpiece"). This failed as well, probably because no one knows what a codpiece is and why you would want to avoid it. Not two weeks would go by without seeing the sign completely flattened to the ground, no doubt caused by a soccer mom alone in her SUV on a cellphone trying to turn the corner with one hand and not even feeling the bump.

After about two and a half years of repairing this sign with alloys of ever-increasing indestructability, Loudoun County finally added a giant flattened bumblebee to the sign, about two feet tall and blazingly bright. Their reasoning was: if you are turning past the median, and you fail to see the seven-inch raised concrete island, the multiply-reinforced signpost, and the sign with the giant booger on it, you will still notice the new warning and drive around it to avoid getting stung.

This was pretty effective until just yesterday, when I was driving home from work to find the intersection congested. A pair of high school girls in a tiny blue hatchback had not only managed to hit the median dead-on, they also managed to get their low-riding car stuck on top with four wheels spinning, unable to get off the island. The distressed pair was being assisted by middle-aged men from all walks of life, because when you help out a young girl with car trouble she will obviously want to go out with you.

The white guy with the potbelly was directing the scene, while a couple of Hispanic guys in their tiny Toyota truck attempted to pull the blue hatchback off the island with a length of twine they had in their truck bed, blocking the entire intersection in the process. Before anyone suggested that they just build a raft, the twine miraculously worked and the cast of the farce drove away in their separate cars, leaving the island with just one more battle scar.

I'm hoping that the County will consider some sort of incendiary device when they come out to repair it again.