As I mentioned a couple months ago, being stuck in day care

was an agonizing way to spend the afternoon, much like that of a cat dipped in peanut butter trying to groom itself. In fact, it was after-school day care and not college applications that sparked in us the early drive to do extracurricular activities. One of mine was gymnastics, which I started in fourth grade with my sister (who was in sixth).

Luckily for us, the city's gymnastics program was offered at our school, so there was no need for buses or travel, and we got out of day care twice a week. Unluckily for us, gymnastics was taught by the same gym teachers who felt that the backbone of physical education involved playing with parachutes, square dancing, and eighties dance music. The gymnastics program that was offered gave us only the barest glimpse into the world glamourized by the movie Stick It, where girls in spandex sat in bathtubs full of ice cubes and puberty is the dread killer of dreams. (This movie is not to be confused with the recent documentary, Stick It In, which details the fight for obscenity and respectability in an outlawed college football cheer). 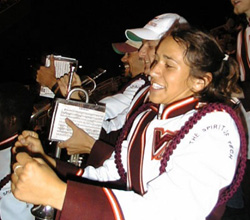 A typical gymnastics session would begin with the entire group running in a circle and jumping over cones to the mellifluous sounds of Donna Summer (this sounds exactly like gym class because it was). This was followed by light stretching and several individual gymnast moves like the front walkover, the back walkover, the front flip, the back flip, the bridge, and various pointed-toe jumps with adjectives like "back" and "front" describing them. There were no pommel horses or rings, though we occasionally got to walk down a balance beam or do a single canned routine on the parallel bars (everyone had to do the exact same routine for safety purposes, and it always ended with the Penny Drop).

While Olympic gymnasts were engaging in death-defying (and crotch-defying) feats, we were inventing "routines" set to the best of Michael Jackson that had us rolling around on the carpet or doing cartwheels, round-offs (cartwheels with attitude, OH SNAP), or posed splits. The one tangible skill I walked away with was the ability to reach two inches past the edge of the Sit N' Reach box in the Physical Fitness test -- this, coupled with my ten minute mile ensured that I could at least get a Satisfactory rating. The day that I could effortlessly do a perfect split without even thinking about it is far in the past. Today, the only toes I can fondle without straining belong to someone else (and generally the cops have a problem with this).

As I grew older, the gymnastics program went on tour, and the best of the gymnasts travelled to a local Jewish private school once a week where we taught the faithful how to run around a room jumping over cones. The only difference between them and us was that all of their parents had bought special gymnastics tights and shoes, while we rolled up in our trashy public school shorts and T-shirts, smoking joints and getting in gang fights.

Book now for the flight to nowhere

Biologists aim to kill an island full of snitches