Every month around this time, I receive a big book of coupons in the mail, aimed at enticing big spending on bigger boxes. The deals range the gamut from "inspired economy" to "if I buy that I should really be donating more money to charity". Here are five sample coupons from this month's brochure: 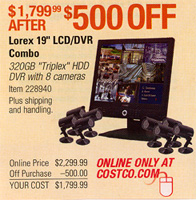 1) For eighteen hundred dollars, you can purchase a security system consisting of 8 mountable cameras, a DVR to record your surveillance tapes, and a 19" LCD monitor to watch your grounds in real time. If you aren't in the right income tax bracket to have "grounds", you can also use the system to film your remake of the music video to Video Killed the Radio Star, or get a local job as a janitor and install them in the locker room of your choice. 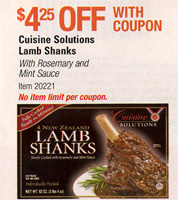 2) As you can see from the picture, these shanks are fashioned from bone so they don't set off any metal detectors. The perfect prison-fight weapon for wrongfully imprisoned lambs who've done mutton wrong. 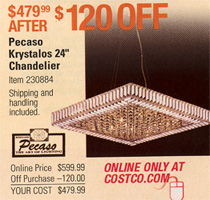 3) In a normal orientation, this might just be a birthday cake made of bling, but turn it upside-down and you have a high-class chandelier that brightens any wine and cheese party (for only four hundred and eighty dollars). Plus, when your guests are openly admiring your style, you can say, "Why yes, it's a Pecaso." 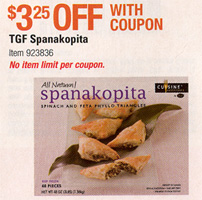 4) I originally thought that Spanakopita was the Spanish version of the popular online encyclopedia, but apparently it's something you put in your mouth and swallow. It may be $3 off, but I've learned that there's an inverse relationship between the number of syllables in a food and how good it tastes. 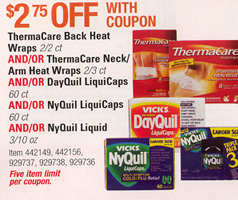 5) The ad copy for this coupon was obviously written by an electrical engineer who spent one too many nights working on the logic gates in his project box, but that doesn't prevent this bargain from being a steal! Mix your own cocktail by choosing a maximum of five different drugs to get you high. When addiction has claimed your job and your home, keep warm on the streets by wrapping yourself in ThermaCare heat wraps.

Boy tries to go to Applebee's

How to rescue a 250 pound bear